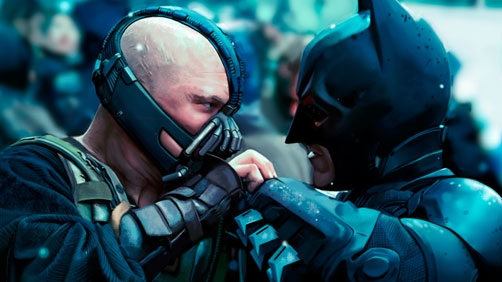 But, now that the trilogy is finished, I can say with certainty that this is way up there on my list of favorite trilogies, taking its place in my own personal hall of fame with the likes of the original Star Wars films, Back to the Future, Lord of the Rings, The Matrix, X-Men and many others.

There can be no doubt that Christopher Nolan did something very right with his first installment, Batman Begins in 2005. He captured something in the Batman universe that no other film-maker had been able to thus far. Somehow, Nolan had been able to perform a medical procedure whereby he extracted the cheese from the concept, and replaced it with story and drama. Of course the great casting and acting didn’t hurt a thing.

And so we waited, almost with baited breath for the second film that would surely follow the first. And we were not disappointed. In 2008, Nolan brought to us a Batman film called The Dark Knight. And it was indeed dark. But a great movie. It explored the very depths of human depravity brought to us courtesy of a demented and twisted character well known in the Batman universe called The Joker. But again, this was done in a way never before done in the Batman universe before. You believed the performance, you believed this man who dressed as a clown was deadly, lethal, and vicious. The film left us in a very dark place indeed, with Batman acting as the scape goat for the sins of Harvey Dent, for the sake, of course, of Gotham. The Dark Knight Rises opens with what is apparently a new villain being taken prisoner on a CIA aircraft. But as it turns out, he’s in much more control of the situation than it first appeared. Ultimately taking a captive and crashing the aircraft. This character looks to be as cruel and destructive as The Joker.

We find out that eight years after the events of The Dark Knight, Batman has retired, and Bruce Wayne has become a hermit who never even bothered to get his injuries repaired. But Gotham seems to be a better place… or is it? Is there something bubbling beneath the surface? Will Batman be needed once again?

I won’t walk you through every point of the plot, but suffice it to say that there was a lot of action and a lot of drama, a few surprises, and a great story of the dark knight rising up from the ashes left in the previous film to defend the city he loves and worked so much for those eight years ago.

The film is epic by any measure and brings with it a surprise about the villain at the end, and brings us the suspense any decent “good vs. evil” story will bring us. Will Batman live, will he die, will he accomplish his mission and save Gotham from certain destruction?

I really liked Bane as a villain. It is now no longer possible to look at a Batman film and not compare the villain to The Joker in The Dark Knight but Bane certainly holds his own. There is a certain mystery around him for most of the film, and a cold menacing aura. He proves pretty early on that he kills with a callus and hardness that is chilling. The mask of course only adds to the effect. Though it can be very hard to act with a mask on, Tom Hardy pulls it off handily.

I know that Bruce Wayne is supposed to be a millionaire with untold resources at his fingertips. But I love that in this film, we get all that stripped away. It makes for great drama and interesting situations for a character not at all used to being broke.

Anne Hathaway’s Catwoman was a great success in my estimation. Catwoman as played by Michelle Pfeiffer in a much earlier installment of Batman was not very believable, not to mention how they tried to make her actually related to cats somehow by having the cats bring her back to life. I admit I have no idea how it happened in the comics, but it certainly didn’t work on the big screen. There is nothing of that silliness here. Selina Kyle is simply a really good thief, has catlike features and apparel, and is a very conflicted character. Interstingly they don’t even actually refer to her as Catwoman.

As almost a side note, one of my favorite humorous moments in the film is when Batman is talking to Catwoman, he turns for just one moment to look at something while he talks to her. When he turns back, she’s gone. Batman says, “So that’s what that feels like.”

Nolan does really well at bringing an ensemble cast together and making us feel like we’ve spent quality time with each character with a couple minor exceptions.

I also really love how we get closure, but we can also see that the world is moving on. The setup is wide open for a fourth film if they wanted it, or we can just assume that things move forward.

As I have already alluded to, keeping up with yourself can be hard. Nolan does an admirable job, and yet I feel this is probably the weakest film in the series. There were large swaths of dialog that felt raw and clunky; like the script needed a lot more work. There were plot holes that, while you may not be able to drive a semi-truck through them, you could easily fit a small car.

For one, how is it exactly that John Blake knows that Bruce Wayne is Batman. It made absolutely no sense. And the plot leans on it just a little bit.

Secondly, why on earth would Bruce trust, or work out a deal to give the keys of Wayne Enterprises to Miranda Tate? It makes no sense. And again, the plot kind of hinges on this.

Here’s another: are we really expected to believe that Gotham PD are so dumb as to send every single officer they have except John Blake and a small handful of others down into the sewers?

Tired of the plot holes yet? I’m not done. Like I said, it really is disappointing for a Nolan film to be riddled with holes like this. How about that amazing healing broken back? Seriously? Bruce is back in fighting condition in no-time flat? It really just doesn’t work. And to top it off, not only has his back not had enough time to heal, but he falls multiple times from a great hight while trying to climb to his freedom, with only a rope tied around his waist that would in reality probably nearly kill him, and certainly re-break his still tender and healing back. Very poorly thought through.

And lets not forget, at the very beginning of the film, when the CIA just takes a couple guys on board at the last minute without apparently checking their faces or anything else about the out. It’s a little eye-rollingly unbelievable.

Also… it only takes a few minutes to turn the reactor into a bomb? It’s no wonder Bruce was worried about it.

Aside from the plot holes, there were things that were just plain unsatisfying.

I felt like Alfred was a real downer. He did not support Bruce/Batman very well, left him at a crucial time and did not re-appear until the end of the film. My impression of Alfred from the previous two films left me feeling that, as written here, he was very out of character. Additionally, the dialog between Bruce and Alfred in the hallway when Alfred leaves is some of the most clunky and horribly written in the film.

And, while yes I have moral problems with sleeping around outside of marriage, it’s not something out of the realm of believability or possibility with a millionaire playboy. But it felt really forced and unreal that after only a few short days Bruce would go from an eight year grief and depression to hopping right into bed with Miranda.

And finally, I felt a little jostled around at the end. Emotionally, we were taken to the place of Batman’s death. I was reconciled with it. It was a good death and John Blake is poised to take on the mantle of The Batman. But wait, is he dead? Oh, no, he’s alive, it’s all staged.

I felt the ending to this film would have been so much stronger if the character had been allowed to die.

Of course one of the questions that we have to ask is, “where does the morality come from?” I am not one of those Christians that believes every film must mention God by name or have the equivalent of an altar call somewhere in it. That should be obvious to anyone from my enjoyment and analysis of the film. But it’s good to analyze the primary message and morality here. In Nolan’s Batman, the moral tale here is that man can be good and do good with enough self-determination. There’s definitely some humanism here to be aware of. As a Christian, I reject this notion. But there’s many redeeming qualities to the Batman franchise.

Ultimately, I think, all good story has redeeming qualities, which is what makes it good story. I think many of us can identify with the flawed super-hero such as Batman. He wants to do what is right, but sometimes fails, or doesn’t approach it in the right way. He makes mistakes and we identify with that. We see self-sacrifice and devotion in Bruce, and though a humanistic message can sometimes make it’s way through, we see ultimately the hypocrisy of such a notion. There are redemptive qualities to be seen at work here.

Should you see it?

Batman isn’t for everyone, but I certainly enjoyed this, and the previous two Batman films. Batman is ultimately a struggle between good and evil, featuring a regular human man doing things physically and scientifically that are fantastical and push just a bit beyond the scope of believability. If you like fantasy films or literature, Batman is sure to please.

It does have, as the previous two films, a lot of violence and disturbing imagery and I would not recommend this film for younger eyes. Given the level of violence in fact, I’m rather surprised the film is only rated PG-13. At the same time, an R would seem sort of harsh but it’s leaning in that general direction.

I look forward to seeing what Nolan does next.