And the Best Movie of All Time is… Vertigo? 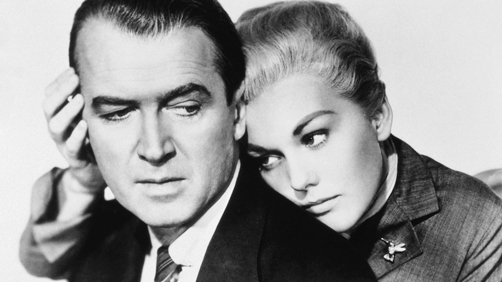 Alfred Hitchcock’s Vertigo topples Citizen Kane at the top of critics’ list in the last Sight & Sound survey for the “best movie of all time.”

“What is Vertigo,” You ask? It’s a fair question to ask, seeing as how few people count it as the best film by its director, Alfred Hitchock. But as far as the most authoritative poll of critics the world over is concerned, it’s the best motion picture of all time.

If this movie still isn’t ringing a bell for you, here is a summary of Vertigo in the words of Jonathan Romney at The Independent:

… Based on a novel by the French duo Boileau and Narcejac, its San Francisco-set plot can roughly be summed up thus (although if you’ve seen the film, you know that this storyline isn’t to be taken at face value). Scottie Ferguson (James Stewart), a detective suffering from fear of heights, is traumatised by his failure to stop a policeman falling to his death. He’s later persuaded by an old friend to follow his wife Madeleine (Kim Novak), who’s acting strangely, and who may be possessed by the spirit of a long-dead woman, Carlotta Valdes. Scottie tracks Madeleine, saves her from drowning, and falls in love with her — but can’t stop her from being killed herself. Doubly traumatised, Ferguson becomes obsessed by another woman, Judy Barton (also played by Novak), whom he’s convinced is Madeleine’s double.

It’s a complex movie. True to Hitchcock’s form, there’s a lot of weirdness, suspense, emotion, and drama. It’s a film that is quite difficult to explain — especially to audiences unfamiliar with classics — because of the many ways it defies movie story-telling conventions.

What I think about Vertigo It does not matter what I think, but since you asked…

Vertigo by Alfred Hitchcock is one of my life-time favorites. I am a huge fan of Jimmy Stewart, but his acting in this film was unique in his career. Rarely did he portray troubled protagonists, and never again did he play one that fell into such depths of dispair. His performance takes an ordinary man and drives him to incredible lengths in a very convincing verge upon insanity.

Hitchock was pushing the envelope for creativity. The film is deliberately slow-paced to give the audience time to empathize with the retired detective all the more. Through his vexing emotional, psychological, and mysterious escapades there are countless twists and imaginative impressions.

It’s also risky for the story to give away a significant mystery in the middle of the movie, such as Vertigo does. Most filmmakers in 1958 to the present would not be willing to give such a reveal so early in the story. It pays off though in Vertigo’s case because audiences connect with the anti-hero for the rest of the picture — an exceptionally strong female character for an era of otherwise shallow female roles.

I could go on, but others will do that for me. Vertigo is uniquely unlike so many other movies, and that’s one of its great claims to fame. Personally, I would be tempted to dub it the best movie of all time.

But even though it’s one of my favorites, I was puzzled by the critics’ choice. Why Vertigo? Why is it “the best film” now? What changed as far as the critics were concerned?

If Vertigo is so great, why hasn’t it been “the best film of all time” since its release? Citizen Kane stood as a crowning achievement for several reasons in the eyes of critics for many decades. As Richard Corliss puts it for TIME:

Last year the folks at Turner Classic Movies asked me for an essay on why Kane was the greatest. That was easy. “We’re playing a game called The Best Film of All Time,” I wrote. “I get Citizen Kane; you can choose anything else. Make that everything else. Take Gone With the Wind, the first two Godfathers and as many Star Wars episodes as you like, throw in the most exalted foreign films, and set them all against a 25-year-old’s first feature, a box-office flop that won only one Oscar (for screenplay), and starring actors who had never been in a movie. I dare you to prove that the mass of other ‘great’ pictures has the originality, daring, cinematic skill and narrative grandeur of the Orson Welles newspaper movie.” So how come critics have changed their minds about these films now? After all these years?

Any overwhelmingly lauded figure or work of art is going to eventually face backlash. Citizen Kane’s position at the top has been threatened since 2002, when Vertigo was only a mere five votes behind it. As many critics have noted, there have been “rumblings of dissent” and “rumors” of this happening for quite some time.

And Richard Rushfield for The Daily Beast:

For 50 years, “venerable, venerated Citizen Kane has topped every list like a Third World President for Life. Its greatness has been unquestionable by any but the most suicidal subversives. But in today’s Twitter-fueled “Backlash Era,” the new norm is “furious negative reaction to anything seemingly hyped or imposed.” Vertigo is a great film — “quirky, subversive, surreal, and outlandish.” But it’s mostly benefiting from the fact that Kane has become too obligatory.

Yes, there is reason to believe that nothing has changed in critics opinions towards Kane — just that they grew tired of praising it above all others. Vertigo was a reasonable choice to demote Kane in terms of popular opinion.

But not all critics agreed [there never is a unanimous vote, is there?]. Many with critical authority make the point Vertigo is great, but not “the greatest.”

Of course, Hitchcock’s film has its share of detractors, namely among more feminist-minded critics who decry the film as flaunting male obsession with women. And there are those — including yours truly — who don’t even consider Vertigo to be Hitchcock’s best work, let alone the best film of all time (I’d vote for Rear Window myself).

Does it matter what audiences think about Vertigo?

There is a disparity between what this poll reflects and what general audiences like most. After all, Vertigo has never hit it off well with regular movie watchers — just the artsy critical types. Why is that? And how come “the best movie ever” doesn’t reflect all audiences appreciations?

The key point about the Sight Sound poll is that it is a critics’ choice, and the term critics’ choice usually denotes something the general public wouldn’t touch with a barge pole. This is not to say the general public is always right — what with Nazism and persisting in nominating The Shawshank Redemption as the greatest film of all time when given half a chance. Yet when it comes to a grudge match between the general public and the film critics, we all know whose side we’re on. Which side are you on? Would you choose Kane, Vertigo, or another film? It’s a tough choice to make, and certainly one only opinionated and knowledgable people can make with some sense of authority.

But some would argue that polls aren’t an accurate opinion anyway. Many of the critics polled have wrote their followups to state just that: polls are poor reflections on the facts of the matter.

So maybe the best film of all time is actually indeterminable… and as puzzling a question as Vertigo is a movie?