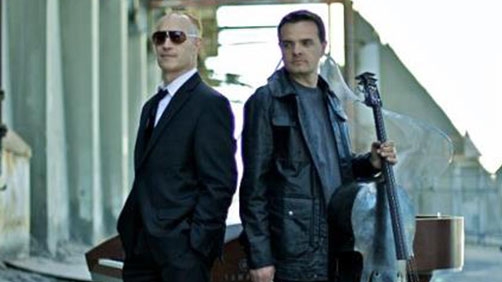 There are few “hooks” in the movie-music world that are as grabby as the Bourne Identity Soundtrack riff (starts at 0:29). Like the movie series, its intensity commands attention. We just had to figure out a way to use it. In our usual style, we thought we’d create an “action movie soundtrack” that combined this and a piece of classical music. In the early 1700’s Antonio Vivaldi wrote a concerto for an instrument that was then largely “undiscovered” by the music world—the cello. Among the first cello solo pieces ever written, Vivaldi was gutsy enough to write it for not only one, but TWO solo cellos and string orchestra. With no “action movies” in the 1700’s, this piece was probably the closest you could get to one. It has intense and exciting moments between beautiful lyrical moments. It was this piece, among others, that got Steven (the cello guy) excited about classical music—it was one of the first pieces he played with orchestra.

Since the new Bourne movie is coming upon us quickly, I thought I would take this opportunity to mention one of my favorite pieces of music right now by a favorite duo of mine, The Piano Guys. The music, by itself is awesome and has a special place in my iTunes library. But the music video is also very good with some great cinematography. I would not have choose to film at such a high shutter speed, but it’s definitely a valid stylistic choice and I respect it. And it’s a lot of fun. Here’s the video, but you should also definitely make sure this is part of your music collection.