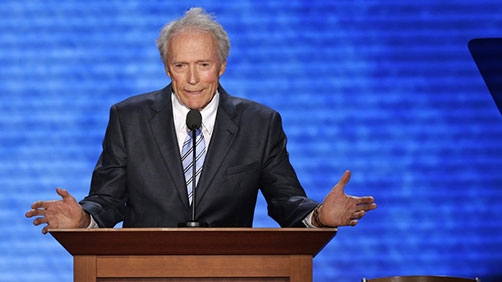 Clint Eastwood made a surprise appearance at the Republican National Convention Thursday night, calling unemployment in America “a national disgrace” before interviewing an empty chair he addressed as “President Obama.”

“I got Mr. Obama sitting here and I was gonna ask him a couple questions,” Eastwood drawled, turning his head toward the bare stool.

Boy he sure stammers a lot these days. What’s worse is he isn’t making me feel any better about ‘conservatives’ in Hollywood. Interviewing an invisible Obama is just about the lamest thing I have ever seen an actor do. Much as I don’t like Obama, this is just downright stupid. He also made a lot of lame and inappropriate jokes.

He ‘talked to Mr. Obama’ about unemployment and that “this administration hasn’t done enough to cure that” but I’m wondering, as a ‘conservative’ what he wants Mr. Obama to do, or more importantly what he wants the conservative candidate to do about private sector employment?

He also said that we “don’t have to vote for someone we don’t really want.” Well that’s good to know, why are you asking me to do that then?