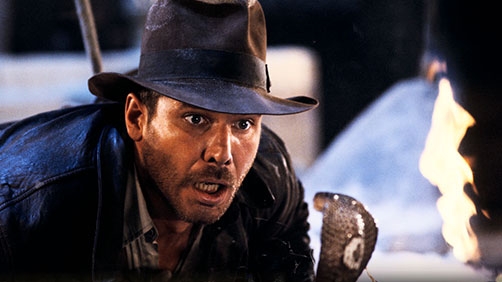 It’s the kind of revelation that would melt the face of any die-hard Indiana Jones fan (this time, with joy): “Raiders of the Lost Ark,” the 1981 adventure film that introduced that globe-trotting archaeologist, will receive a one-week Imax release next month, Lucasfilm said on Tuesday.

Prepare to be shocked and horrified… I’ve never been a big fan of the Indiana Jones trilogy. It’s a shocking revelation, I know, but it just never worked for me. However, this is kind of a big deal. And I particularly love this (emphasis mine):

Mr. Spielberg, who with the sound designer Ben Burtt supervised the conversion of “Raiders of the Lost Ark” to Imax, said that no special effects or other visual elements of the film were changed. The audio, he said, had been enhanced for surround sound: “When the boulder is rolling, chasing Indy through the cave, you really feel the boulder in your stomach, the way you do when a marching band passes by, and you’re standing right next to it.”

As it should be. The problem is that when studios or directors to “upgrades” to their films (*cough* George Lucas *cough*), they don’t seem content to just enhance it, they have to change it and ruin it and completely mess it up. I’m not against enhancements and appropriate use of CGI upgrades, cleaning up matte lines, fixing scratches in the film and cleaning up excessive film grain, and all that stuff. But changing the story of a beloved movie, even if just a little bit, is a big no-no in my book. So I mostly think now that re-releases should be just left alone. And I’m glad to see, though not a fan of the Indy films, that Spielberg is doing just that after learning his lesson with E.T.