‘Lawless’ness is Coming To Town 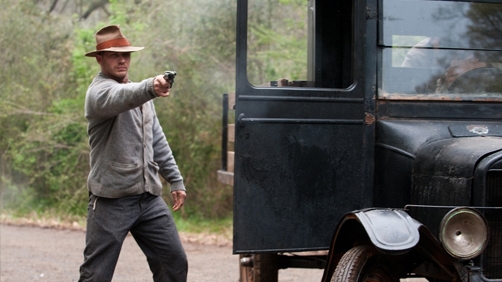 Lawless directed by John Hillcoat is coming to theaters August 29th. What in the trailers sort of looks like a western setting is really a depiction of depression era Franklin County, Virginia. Two bootlegger brothers have local authorities hustling in on their racket. To make matters worse (read as “exciting”), it escalates into a larger conflict between lawmen and career criminals.

The most notable reason the film is worth wartching is to see Gary Oldman, Tom Hardy, Jessica Chastain, and Shia LeBeouf. Tom Hardy and Gary Oldman were filming these roles back-to-back with with filming of The Dark Knight Rises.

Regina Avalos for The Examiner:

In this film, Hardy will play Forrest Bondurant. He spoke about his role and where he drew inspiration for his character recently. He said the following, according to Digital Spy:

The actor also revealed that he intended to lose weight for this film, but the production schedule for The Dark Knight Rises prevented that. He plays the villain Bane in the film.

I have high hopes for Tom Hardy’s performance, and trust Oldman will be as smashing as ever. But I almost cringe to think of what Shia might do to the film. Since his part as Sam Witwicky of the Transformers Michael Bay frandchise appeared, it’s not easy to appreciate that Shia is actually a decent actor. I trust a film like Lawless will give him a new lease on screen time.

Please be aware that we do not rate films based on family friendliness. ‘Lawless’ is rated R by the MPAA for strong bloody violence, language, and some sexuality/nudity.