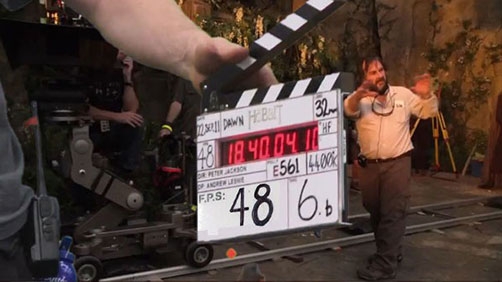 There is a kind of one-upmanship going on among the titans of the mega-uber-blockbusters, Jackson and James Cameron—who himself just announced that he plans to shoot “Avatar 2” and the film’s third installment using digital equipment that delivers 60 frames per second. While admiring the LOTR trilogy and “Avatar,” which remains the state of the art in 3D, I believe their expanding ambitions come with risks.

Right, I see it as a sort of abandoning of the story telling craft and instead, exactly as Ebert says, trying to one up each other on technological prowess. Good technology is important, but I think they’ve lost sight of the most important aspects of film-making (I still have no desire to see Avatar).

There’s nothing magic about 24 fps. It just happened to be the lowest frame rate that could carry sound.

But I disagree, as anyone who has read a couple of my previous posts on this subject here, or followed me elsewhere will know, I think there is something magical about 24 fps. Whether intentional, or as Ebert states unintentional, what happens with 24 fps is you get more motion blur in your movement. The result is a more natural, less strobing, and what we call a more cinematic look. Astute observers of of film and video can tell the difference between the cinematic look of 24 fps, and the home video look of 30 fps (or higher). The result of higher frame rates is actually not very pleasing.

But whatever my quibble with that statement from Ebert, I heartily agree with this last one.

In the best of all possible worlds, directors would obsess about the quality of their storytelling, and not the details of their technical methods. It is perfectly possible to make a great film in 2D and at an average length. I submit that “Fargo” is nearly a perfect film at 98 minutes, and that “No Country for Old Men” feels just right at 122 minutes. I fear that Jackson and Cameron have been carried by ambition to make films that leave the realm of artistic economy and are trying to gain stature via the realm of bloated manufacturing. It reminds me of the period when Detroit started adding fins to its cars. Is it too much to expect Jackson and Cameron to just, you know, like make a movie?