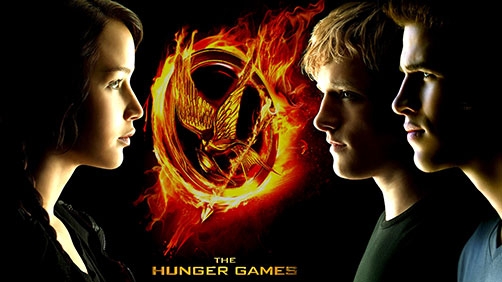 Released to theaters back in March, The Hunger Games has recently been released to home video, which afforded me another chance to watch the film this past weekend.

I first became familiar with The Hunger Games through the recommendation of a good friend of mine that I should read the books. I used to be a ravenous reader. I mean an actual reader, like books with actual paper, laying on my bed reading books. Those days are long gone now that I’m a married man with work to do all day, every day. There are videos to edit, websites to design, movie websites to curate…

The way I consume books now is often by audio book. A search on Audible.com revealed that The Hunger Games was indeed available in audiobook form. So I purchased and downloaded the first book and I was off.

At first, I was off-put by the first-person present tense story telling, and I still don’t think that was the best choice. I’m not a fan of first-person story telling in any context, but normally I can tolerate it and see why the author would choose such a method of story telling. First-person present tense on the other hand is a very tough pill for me to swallow. So many things get awkward, so much structure gets weird to make the story telling work. And indeed, for the first few chapters I couldn’t help but note how much better this book would be if it were told in the past tense, how much less awkward the structure would be. Indeed, the limitation of this mode of story telling is so tough that Suzanne Collins often takes trips into the past in Katniss’ head to tell a part of the story in the past tense.

But I must admit despite this serious shortcoming, that first book did grab my attention and any time I was not able to be listening to the audio book, I was anxious to get back to it. In short, I fell in love with the book in a lot of ways. It is not destined to ever be on my list of greatest books of all time, but it is a good book and one I wouldn’t hesitate to recommend to anyone to read.

So when the film adaptation was announced I was both excited and hesitant. Excited because I like the book a lot and felt that a film adaptation had potential. Hesitant because many films adapted from books often ruin the story in unforgivable ways.

But the trailers continued to whet my appetite for the film and despite my hesitation, my excitement for the film continued to build. And finally I went to the theater in March with a good friend of mine and saw the film. And when it was all over and I was walking out, I was a fairly happy camper. In fact in terms of story, there’s just not a lot to complain about. Any book translated to film is going to have to make changes, and some things are just not going to get on the big screen due to time constraints. What is on screen is faithful to the book in the ways that matter, what has changed often did so for the better and what was not there was well chosen to be so.

A Critique of our Culture

Let the reader be warned, here there be spoilers.

The Hunger Games is a story about a dystopian future where the Capitol has cowed its twelve outlying districts into submission. Once a long time ago, there had been a rebellion which had been crushed by the army and forces of the capitol. As punishment, reminder, act of enslavement, and technique of simultaneously instilling fear and hope into the residents of the subservient districts, it was decreed that each year the districts would send two children between the ages of twelve and eighteen, a male and female, as tribute to participate in The Hunger Games. The games are a sci-fi, drawn out version of a roman gladitor-esk arena where the participants fight to the death until a lone victor remains standing.

In the more prestigious districts, this has become an honor, and many children train and vie to become tributes. These are referred to as career tributes. In the poorer districts, such as district twelve, where Katniss is from, there is no honor, only hurt and sacrifice. No one ever volunteers, they are chosen from names in a drawing.

In the mighty capitol, the games have become a sick form of entertainment, a reality television show. The stakes are real and so the entertainment is enthralling. This is at the heart of the cultural critique in The Hunger Games. Though the outfits are gaudy, though the perversion is intense, and though our current culture is only a shadow of the culture we see here, it is nevertheless an eye-opening — if fictitious — look at what a reality TV culture could become.

Of course every good story has a protagonist and in this one, Katniss is ours. Katniss is just a girl trying to keep her family alive. Her mother sort of checked out after her husband, Katniss’ father, was killed in a mining accident. Katniss, as our dutiful (if young) protagonist stepped up to the role of provider — breaking district rules to hunt on capitol land for wild game. It is this that gives Katniss more skill than she should have had in the games.

Katniss, like everyone else in the outlying districts starts out a bit defeated. Conditioned by the environment she grew up in, the games are just a part of life… until the games claim her younger sister for whom she has been caring for many years. Katniss volunteers in place of her sister, whose name was drawn for this year’s games.

And during Katniss’ journey we see a rebellion and defiance against the injustice of the capitol begin to grow in her.

Haymitch is the reluctant one in this story. At first he appears to be just another drunken bum, but as the story progresses, we can begin to get a feel for what it must be like to be a mentor to kids who are going to go fight for their life. And since he was the last victor from district twelve, we know that every single kid he had mentored had gone into the arena and perished. So we begin to see why Haymitch has become a bitter, cynical drunkard. But he’s on a journey too. He begins to care for Katniss. And the film provided even more of an opportunity to see that since it was not told strictly from Katniss’ perspective. This means we can get outside of the games occasionally and see Haymitch watching and wincing, and being prodded to get sponsors to provide Katniss the expensive capitol medicine she needed to heal.

Katniss, being the broken person that she is, does not understand love or how to deal with it. And this is part of her journey. Peeta is willing to lay down his life so that Katniss may win and Katniss has no understanding of why he would do this for her. This too is a powerful part of this story.

My issues with this film had more to do with technical execution than story. It’s funny actually, my wife and I both predicted this would happen. Because Katniss’ story is told in the first-person present tense, we knew directory Gary Ross would be compelled to do something to make it feel that way in the film. And indeed he did. From shot one you can tell that this is one of those hand-held films. And I’ll even say it worked very well later in the film. But at the beginning of the film when you want to see what’s going on, what things look like, and you want to see establishing shots, Ross really belabors the use of long-lens, handheld shaky cam. As I watched the home-video release which I downloaded from iTunes, one of the notes I made was that a little shaky cam is actually good, but sometimes the amount Gary Ross uses is just way over the top in the beginning of the film.

As well, the use of jump cuts tended to be a little off-putting. And again, it worked well as the film progressed to games and the action but seemed really jarring in the opening and establishing of the film where there was no action.

Additionally, I did have a story element issue. In the book, finding out who Peeta was with the offering of the bread to a starving Katniss was vital to discovering Peeta’s personality. And unfortunately I do not feel that it is very well exposited in the film at all. In fact I wondered if you would even quite know what was going on with the bread scene if you had not read the book. It seemed very poorly executed.

And then there’s the use of Ceaser Flickerman’s narration only when we as the viewer needed it. It was way too obvious and not very well weaved into the story. It was very transparent that it was used only for exposition, which makes for a very bad viewing experience.

Not All Bad By Any Means

Having said that, there is much more good that outweighs these irritations — like James Newton Howard’s score. Howard really captures the feel and mood of Katniss’ world very well and I enjoyed it very much. Just as vital were the times when there was no music and the music then comes in at a vital moment. That makes for a very powerful audio visual experience. For instance throughout the reaping when Primm is chosen and Katniss volunteers there is no music. It’s stark and bare. But as Effie asks for applause for Katniss and instead the district gives her their three-finger salute, the low bass tones that begin to color the mood are absolutely, stunningly perfect.

In fact all the sound design in the movie is very well thought out.

Stanely Tucci as Ceaser Flickerman is absolutely delightful as is Elizabeth Banks as Effie Trinket. In fact in large part I could not have asked for better casting in this film.

The evoking of the Schindler’s List style nazism is well done in the beginning of the film as the children present themselves for the reaping. Though not completely black and white, there is a very drab, washed out, and gritty appearance that serves the film very well.

And ultimately I was also very pleased with the visual effects. There was CGI in this movie, but it never felt like a CGI extravaganza. And in watching the special features, there were shots in the film that looked totally real that were in fact, completely CGI. This is a testament to how well done the CGI was.

And ultimately the themes this film explores really hit uncomfortably close to home many times.

I highly recommend this film. If you did not get a chance to see it in theater, by all means, be sure to pick this up on DVD, Blu-Ray, or download via iTunes. It is a film worthy of your library.