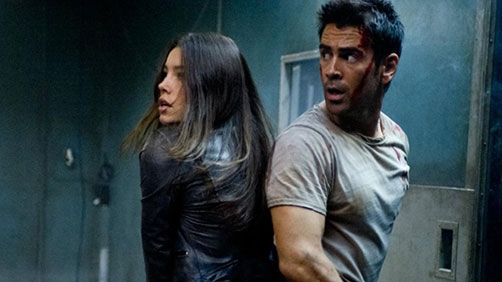 From the moment I saw the trailer for this film, I knew I wanted to go see it. I’m a pretty big fan of Minority Report, as well as The Matrix, and this film appeared as though it would have similar thematic elements from both of those films. Additionally, I’ve only seen Colin Farrell a couple times, but he’s been good in what I have seen. I particularly enjoyed The Recruit.

When I first saw the trailer however, I was not aware that it was a remake of an Arnold Schwarzenegger film. But if I had been aware, I think I would have wanted to see it all the more, not being a big Schwarzenegger fan. So I went to the theatre to see this Total Recall remake. Only after that did I watch the 1990 Total Recall for some context.

I have to say that the 1990 rendition is better than I thought it would be. But that is not to say it was good. It was indeed a horrible film. Of course Schwarzenegger can’t act to save his life, but in many other ways the film suffered from poor film-making. So many of the futuristic ideas here are nothing more than polished up hold-overs from the ‘80s. The cars look completely stupid, and the plot was a complete mess. It also seems that the director, Paul Verhoeven had a penchant for seeing fake looking shots of eyes popping out of heads. We got to see it in Schwarzenegger’s dream at the beginning of the film, we got to see Cohaagen’s eyes pop completely out, and we got to see it for both Schwarzenegger again and his love interest. It was so fake as to be laughable actually. And the idea that a machine could melt water on Mars to make a breathable oxygen atmosphere in a matter of a minute — or a short enough amount of time at least, that Schwarzenegger and his girl did not wind up dying from oxygen depravation after being blown out into the vacuum (never mind the many other scientific problems with this concept) — is completely ludicrous. But this is not a review of the original.

While the look and feel of the original Total Recall was an exercise in the extremely campy 1980s sci-fi style, 2012’s Total Recall is a different thing entirely. This film takes itself very seriously and wants to be believable in many ways. And despite the abundant use of CGI that I’m certain went into this film, it has a very gritty realism to it. Where the blood, gore, and bullets of the original have a decidedly fake quality, there is no such non-sense in 2012. There’s also no lopsided mutants with missing eyes or brains hanging out, and definitely no mutants living in the belly of a host mutant (what a terrible idea that was).

Now don’t take me wrong here, there are very visually arresting parts in this film — certainly the wide shots of the colony are an excersize in CGI beauty, and the hover cars are appropriately eye catching — but this film’s true nature is derived from it’s use of action.

While there is action, and plenty of it in this remake, the film is allowed to breathe here and there. There is nothing worse to me than overwhelming action without appropriate time to catch a breath. And for the most part, I do not feel this film suffers from that problem. The film opens apparently in the middle of an action sequence in which Doug Quaid is captured by futuristic weapons. We then find this is a dream, which Quaid believes is only just that. But there’s more to it. We’re allowed a bit to get into the current mind of Quaid and spend some time setting some things up (a remedy to a complaint I had with the original). We see that Quaid wishes there was more to his life and that he’s considering going to “Rekall” to have memories of cool and exciting things implanted in his head. Here we dive into action as Quaid “reacts” and wonders how he was able to do what he did. What follows is a fairly long action sequence, punctuated by brief periods of respite. Until we land again in Quaid’s old apartment. We rest here for a bit and I love this sequence of discovery. In particular we take a little time to play the Piano, which Quaid discovers to his amazement that he can play which he had said earlier in the film that he had wanted to be able to play piano. At first it just seems like a nice touch, as he plays. But suddenly he comes upon a key on the Piano as he plays that doesn’t work. Upon investigation, he realizes that he has the correct key from the safety deposit box he left himself earlier. Playing the sequence again with this key reveals a hologram of himself spinning him a tail of how he used to work for the tyrannical government but now he switched sides to the resistance, was caught and had his memory wiped.

The film goes through a few more ups and downs in the action, and I did feel like two of the sequences were a bit indulgent (more on that later), but I was mostly happy with the pacing. Being a film made in 2012 about the future with sci-fi elements, there is also of course plenty of action that stretches the realm of believability. For instance disengaging the car’s maglock to go into free fall from the suspension free-way, only to reengage it again at the last second to prevent complete annihilation upon impact is a little hokey, even if they did beat up the car and occupants pretty badly.

There are three basic themes in this film. One is the idea of a post-apocalyptic world where mankind basically destroyed himself with his own technology and machinations. And I think the reason this type of film keeps getting made is because the threat has never really gone away in our modern time. There’s always a worry that one of the countries possessing the technology and means might decide to use it in a war to devastating effect.

The second, and perhaps more interesting theme is that of tyranny, the abuse of power, and what we can most easily relate it to, States Rights. Power corrupts, and Cohaagen has had a large dose of the corrupting medicine it seems. And the colony (state) is apparently dependent upon Cohaagen’s government over in the United Federation of Britain for the livelihood and sustenance (it certainly sounds like a familiar situation doesn’t it?).

The third theme is that of the question, what is it that really defines who we are? And that of doing what is right regardless of the circumstances or the past. We find that Doug Quaid was actually an agent named Hauser who had actually concocted all the events of the film to lead to the downfall of The Rebellion, and the Colony. Quaid doesn’t like what he sees of this, and with the words of the now martyr Mathias ringing in his ears to focus on the present and not look to his unremembered past to see who he was, he escapes and sets out to make things right in the present. This film is not without it’s shortcomings, not the least of which is very poorly characterized villains. This film basically has two villains, Lori who played the part of Quaid’s wife at first when he had an implanted memory, and later turned out to be a significant nemesis, and Chancellor Cohaagen. Unfortunately we never learned what drove Lori to do what she did/was doing which made her seem like an automaton blindly running after Quaid. Had we simply spent a little bit of time learning what drove her, I think the film would have worked far better.

Chancellor Cohaagen doesn’t get much screen time and winds up not being much more than a tyrannical despot who has no real depth of character. We have no idea why he would risk his life to show up with his mostly automated troops in the midst of gun battle to simply sling mean words around. We also had no idea until the last minute that this dude could fight as well as Quaid or Beckinsale. This seems important and yet we know nothing of it.

While I mentioned early that the movie was well paced, I did mention a caveat which I will address now. The car chase scene, and the elevator chase scene both feel indulgent. They could have been much shorter which would have given us more time for both plot and character development. When you start glancing at your metaphorical watch during what is supposed to be an intense action scene, you have overstayed your welcome.

And as for the pun I used in the headline, can we seriously not come up with a better name for the inter-planetary elevator?The Fall… I ask you, how long did it take to come up with that one?

It often seems to me there should be a rating between PG-13 and R because there are times when I think PG-13 is not a harsh enough rating, and an R would be too harsh of a rating.

I have no such reservations here when I say this film should have been rated R. My opinion is they pushed the PG-13 through on technicalities. Aside from being bloody and violent (two things which I don’t personally mind, but which one should be aware of), there was plenty of language, one F-bomb, and a scene containing brief partial nudity, which is where I say the R rating should have been instant. It was actually really quite frustrating. Though I personally found the scene disgusting and off-putting, it was definitely presented in a sexual way and it made me upset that this otherwise decent movie would put itself in the position of making it hard to recommend.

One of the ideas I’ve seen tossed around the internet lately is that this remake was nothing more than a cash grab. I really do not feel this way about the film at all. The reason is because I love the concept for this film, and if I were a film-maker I would have wanted a better film than Schwarzenegger’s to flesh out this idea. This film, I think, was a worthy film to be made and was in many ways well executed. The unfortunate qualities aside, I enjoyed this movie a lot and plan to get it when it comes out on Blu-ray.

Be sure to let us know what you thought in the comments below.