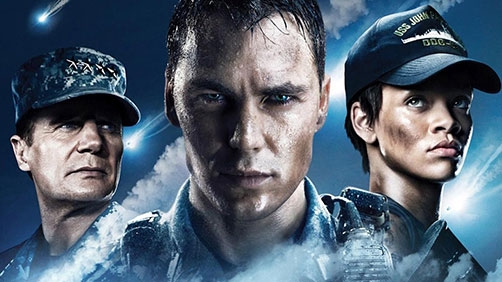 The Battle for Earth Begins at Sea

If you didn’t get enough of the Transformers franchise from Michael Bay’s trilogy, and you simply cannot wait for the next installment, here is an appetizer. Battleship, by director Peter Berg, is one ginormous action flick for people that don’t mind absurdity and inauthenticity. If it’s strange alien lifeforms, super-sized battle sequences, and impulsive/irrational heroics you want, catch Cowboys and Aliens, I Am Number Four, or Battleship.

Battleship is an epic-scaled action-adventure that unfolds at sea in the skies and over land as the American Navy fights for mankind’s survival against a superior race of aliens. Inspired by Hasbro’s classic naval combat game, Battleship stars Taylor Kitsch as Lt. Alex Hopper, Rihanna as Petty Officer Raikes, and international superstar Liam Neeson as Hopper and Stone’s superior (and Sam’s father), Admiral Shane.

Battleship should have been infinitely better than it was, but rather than learn from the shortcomings of the Transformers franchise, it careens head-long into the abyss far beyond the absurdity of Michael Bay. I would watch this movie again only if there was absolutely nothing else to watch and a very important (but foolhardy) friend compelled me to.

I like a good movie that’s based on something else of pop culture. Countless books have been turned into awesome movies — even the likes of Dracula, The Hunger Games, and The Help all started as novels.

But there is another class of pop-culture-driven movies: these are based on TV shows, games, theme park rides, comic books, and the like. One notable such film is the original Pirates of the Caribbean: Dead Man’s Chest (2006). It started out as a ride at Disney World that has been around for several decades. The movie itself has little in common with the ride, but there is a corollary nevertheless.

Battleship was also an impressive film in terms of visual effects. The locals are realistic and breathtaking (although nothing in this film literally captured my breath). Impossible over-sized epic-scaled battles, explosions, and strange technology all look believable.

One thing that stood out to me is the physical appearance of the aliens. They have a very human-like form: pale skin, two eyes, a nose, a mouth, and the like, all where they basically are found on human beings. This made them feel relatable — less like wild imaginary beings from the mind of a comic book storyteller, and more like aliens you might expect to be discovered in the real world. It’s hard to say why human-like aliens work; they just do.

It’s ironic that Peter Berg has directed other films, like, Very Bad Things — no joke. There’s also Friday Night Lights, Hancock, and Virtuality. None of his work is worth mentioning if you don’t mention their disappointments. He’s not an accomplished feature film director; more of a B- TV show director at his best.

It’s difficult to know where to begin with the shortcomings of a movie like Battleship. I could address my expectations and hopes for the film — being a fan of the game as I was growing up — but there really weren’t any expectations. When I saw the trailers in theaters months before its debut I knew beyond a shadow of a doubt that something was amiss. My expectations were low.

But even now, having seen Battleship and absorbed it’s shortcomings, I’m overwhelmed by how numerous they are. When you add up the pros and the cons, Battleship is critically imbalanced with faults. It’s the sort of mistake that makes you question the very premise of the storyline (the strategic game of Navy warfare). But it’s not the premise I believe is at fault.

This is a severe case of filmmakers not concerned with the merits of their film; they truly sent the message that they didn’t give a care what people thought of this movie. They didn’t care for the movie themselves, by the looks of it. A sense of good filmmakers decorum is utterly absent from the fruit of their labors.

And perhaps to make it worth their time, they modeled the visual effects after their favorite sci-fi first person shooter video games, like Halo. For that matter, they might have turned this into a video game rather than a feature film.

Inauthenticity
I expect a movie with a budget and resources like Battleship to maintain legitimacy wherever they can. The Navy is a big deal in our culture; You don’t mess with the Navy; you don’t misrepresent them in the slightest, is the way I feel. Battleship delivers sequences of events with reckless departures from authenticity in several instances.

The inauthenticity is not limited to the procedures of the military. There are scientific blunders also. At one point, about five or six men carry a hefty missile on the battleship. They specifically name what sort of missile it is, and say it weighs about a thousand pounds. In actuality, such a missile weighs around 2,300 pounds, and six men couldn’t possibly have carried the missile.

Absurdly creative alien weaponry
There are these spiky wheels that spin at ridiculous speeds. They slice through any sort of material in their path. A fire rises out of the wheel on all sides. They have a whip-like metal tail that can feel, sense, and thrash anything in its path at incredibly high speeds as it makes mayhem in every sense of the word. These wheels aren’t exactly vehicles. Nor are they intelligent in and of themselves, per se. They just do what they do to look bizarre and make a mess and give the villains a significant edge over human weaponry and defense systems. They defy physics (gravity, mass, etc.) and they defy reason in their engineering. There’s no other way to describe them but sensational.

Characters, dialogue, and all the other big problems
There is a general sense of schizophrenia. Character development is all over the place for central characters. At times they appear concerned with the plot, and at other times they don’t seem to know what to do with themselves — not because they are responding as one might expect to the sort of crisis they’re faced with, but like the actors didn’t know how to communicate any sort of realistic behavior for their roles.

I blame the writers for this. Had the dialogue lent itself to describing the unique traits of characters and their arcs it would have gone a long way to produce sensible character development. But as it is, it felt like the movie had a first draft that saw a few revisions and then it was used as the final script, when it should have received few more months worth of drafts, re-writes, and collaborative eyes searching for plot holes to fix.

Besides the writer’s foibles the actors came across as amateurish. Liam Neeson himself seems pathetic. Were this his first role I had seen him in I would’ve figured him to be an incapable actor. Of all the characters portrayed, I thought Rihanna’s Petty Officer Cora ‘Weps’ Raikes was the most convincing, and she wasn’t even all that realistic for her part as a Navy woman.

To compensate for the poor script and empty acting, the camera frequently shows the main protagonist staring off into the distance. Shots of Hopper staring were so numerous (not counting other characters) that I think there is more staring in this one film than all of the Twilight movies combined.

How to watch this film

It can be fun to watch a bad movie, such as this one. It’s so terrible that it makes up for some of the stupidity in it’s lame qualities because they are so numerous that they become laughable. For the majority of the film, I enjoyed mocking the implausibility, the schizophrenia, and the over-the-top thrills.

If you watch the film, be sure to see it with someone that will laugh along side you. You don’t want to be a wet fish on their joy for sensationalism, nor do you want them to be a kill-joy that thinks your twisted enjoyment for the stupidity is uncalled-for. It is called for, so catch the movie with someone who loves to hate a dumb movie.

And God forbid that you pay to watch this garbage more than a $1. It’s not worth any more.