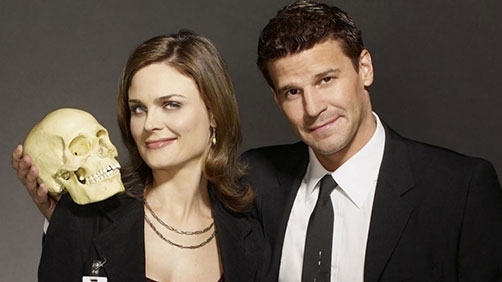 Bones returned Monday night with the premiere of season 8. As a cable cutter, I could not have watched it until Tuesday via Hulu (or any other non-broadcast means). As it was, I was unable to watch it on Tuesday, catching it on Hulu via my Apple TV last night instead.

The season 8 premiere picks up three months after Brennan (Bones) took off with her dad and daughter Christine because she was suspected of murder due to implanted evidence by serial killer and super computer wizard genius — who can do things with computers not even possible in the real world - Christopher Pelant.

Being on the run doesn’t keep Brennan from communicating with her best friend Angela though. They somehow (we’re not told how) arranged to communicate via flowers. Booth found out and it did not make him happy. Brennan has been doing some homework on Pelant and finds he murdered his high school guidance counselor. She also finds where he buried her and is able to arrange for the team from the Jeffersonian to show up on the scene. Back at the lab, Cam arranges for information to be sent to Booth via email which we later discover was arranged as a digital trap for Pelant. But Booth also acts on the information, chasing down a lead which leads him right to Brennan. This made for a great reunion of the beloved couple and some very cute moments with Booth and his daughter Christine.

Hodgins, delivering a flower message for Angela, runs into Pelant at the cemetery where we discover that “harmless” Hodgins has a ferocious side toward the man who has killed so many, is hurting his friends, and getting away with it. Hodgins nearly strangles Pelant to death until he comes to his senses and realizes that this is what Pelant actually wants him to do. And also that if he does, Brennan’s name will never be cleared.

Hodgins lets Dr. Sweets in on the fact that Pelant wanted Hodgins to kill him, which in turn leads Sweets to come to a theory about Pelant having three different sides, which was symbolized by some sort of (nonsensical) code triangle that Angela is working on. Yes, again with the strange shrink stuff that leads to strange and nonsensical computer stuff. It’s getting to be a problem with Bones. But I digress…

Angela is now able to decipher the code and discover how Pelant inserted Brennan into the implicating security footage.

In a twist ending, Pelant is able to completely erase/change his identity. He is now a “citizen of Egypt” and has been extradited. Bones gets to slap Pelant, which was satisfying. But one final twist which we aren’t sure what it means yet — Agent Flynn picked up the flower Pelant gave to Brennan out of the trash, and the shot lingers on him starring at the flower a little too long, then walking away. What does it mean?

Much of the humor we’ve come to associate with Bones for the last several seasons is not present in this episode, but mercifully so. I enjoy some humor in my drama as much as the next guy but it was getting a bit ridiculous with Bones. And this episode is pretty much pure drama with hints of humor thrown in, mostly the team’s evasions of questions regarding Bones’ whereabouts and what they might be doing to help her and clear her name. But with that said, this is still just the season premiere and they had a lot of work to do to clear Brennan by the end of the episode. They may return to the overly comedic schtick next week. Personally, I’m hopeful that this signals a bit more of a return to Bones‘ roots as a more serious drama. We obviously haven’t seen the last of Pelant, the slimy killer/hacker. Who knows what he has planned, but we’ve heard Pelant he will be a constant presence throughout season 8. And I’m not sure what to make of the thing with Flynn.

Bones has always tended toward complicated and impossible plots, but this episode is way up there. I mean look how long it took me to explain the plot — I barely followed it last night and had to look up some recaps online to remember it all and even explain how some parts worked. It was a little much. And the complicated and junk science and computer jiggery pokery is all a bit over the top.

It was definitely fun to see Booth and Bones reunited after three months and to see Booth interacting with his kid and so excited to see her.

Hearing Max tell Booth at the end of the episode that he’s not comfortable with things and that “Pelant needs killing, Booth!” was fun, because he certainly does.

I’m hopeful for this season. I have been known to say that it’s time for Bones to end before it really jumps the shark. They’ve come dangerously close to shark infested waters before and I want to see the show go out on a good note. I’m still hopeful that they’ll bring it in for a landing. But apparently Bones had good viewership on the season premiere and everyone online seems to love it. Studio executives seem to only think in terms of dollar signs so I’m guessing they’ll run this show into the ground.

In any event, I am hopeful of seeing a more serious show this season — more in line with the show I fell in love with in the early days.