Film.com on ‘Trouble with the Curve’ 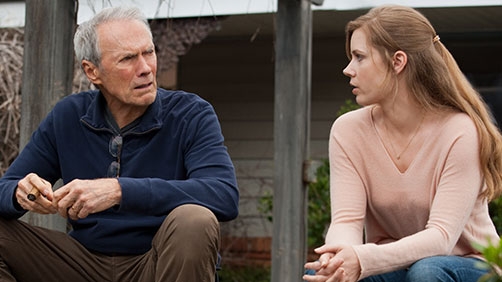 This is a movie starring an old coot, clearly made for old coots of all ages who like their movies served up with a little bit of story, a little bit of character and a soupcon of schmaltz. Yet it ends up just on the right side of the line between crowd-pleasing and pandering. Even if Eastwood’s grumpy old man routine wears you down – it’s perhaps too much of a not-very-good thing – there are lots of terrific second bananas, including Amy Adams, John Goodman and Justin Timberlake, to counter all that self-conscious squinting, scowling and grunting.

The review is largely in favor of the film. I want to see it but just haven’t been able to yet. The Justin Timberlake factor makes me a little nervous but review writer Stephanie seems to like him, going so far as to say:

Timberlake, though, may be the movie’s soul

Huh. We’ll see. Also, I thought this was funny given recent events with Eastwood:

You do need a high tolerance for Eastwood’s grouchy grimace to get through “Trouble with the Curve.” The performance is safely apolitical, though it’s easy to imagine Gus would have little tolerance for that alleged 47% of Americans who laze about, living off the fat of his hard-earned tax dollars.