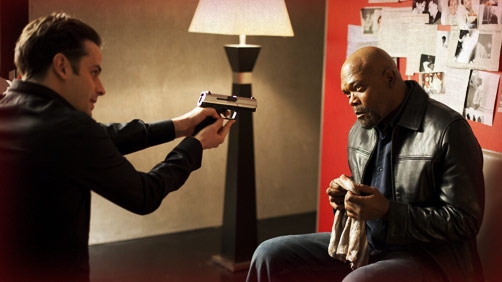 Samuel Jackson and Tom Wilkinson should make for an entertaining movie, wouldn’t you agree? I thought so when I saw that Redbox has a new DVD release starring these two in a crime/action film.

The description of The Samaritan from Rotten Tomatoes:

After twenty‐five years in prison, Foley (Samuel L. Jackson) is finished with the grifter’s life. When he meets an elusive young woman named Iris (Ruth Negga), the possibility of a new start looks real. But his past is proving to be a stubborn companion: Ethan (Luke Kirby), the son of his former partner, has an ingenious plan and he wants Foley in. The harder Foley tries to escape his past, the tighter he is ensnared in Ethan’s web of secrets, until it becomes all too clear to Foley that some wrongs can never be made right.

And now for the trailer:

So it looks appetizing. The contrast ratios are askew, but that might be more appealing in an actual viewing of the film, right? At least I didn’t see many, if any, tell-tale signs from The Samaritan’s trailer that it would disappoint.

But make no mistake, and always research a movie before you rent it (or pay a whopping ticket price and journey to the moviehouse). The Samaritan stinks, and it’s not just critics who think so. Rotten Tomatoes’ audience gives it a 41%. That’s terrible, and perhaps it seems inconsistent with the film’s representation in the trailer.

In spite of its dismal recognition, my curiosity got peaked. Who is the “samaritan” of this film? I wondered. The trailer made no attempt to reflect on the title, nor do the available summaries — at least, that’s what I thought at first. I thought by the flow of the story and the nature of the character — Foley, played by Jackson — there should be a “good” samaritan that comes along, or that there was more to the story than the trailer cared to reveal. It could’ve been a juicy setup for some clever plot development from Christopher Nolan of Memento.

Then, of course, I realized that Foley himself is the samaritan that’s trying to turn a new leaf. All of the sudden the mystery surrounding Foley’s story became nil. That’s bad.

I’m also slightly annoyed that Samuel Jackson is playing the part of what I think should belong to a much younger guy. Sam is 64 this year. I have great difficulty seeing him with a much younger woman, and not concerned for, well, the issues that are usually at the forefront of a senior’s mind. Why is this samaritan not thinking about his health? How come an ex convict is so healthy giving his life choices and time in prison?

It goes to show you that sometimes the best of premises are spoiled by the machine. If the studio would’ve given the film a younger actor, honed the story/script, and done something about the lighting, then maybe they wouldn’t have lost $11,998,300 (estimated) on this production.