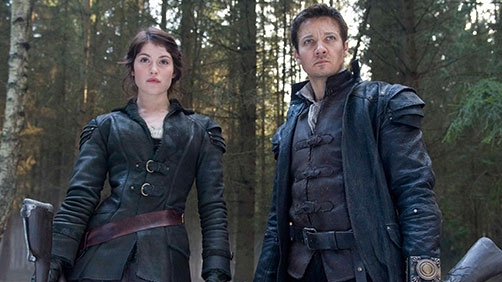 Last year Jeremy Renner and Gemma Arterton starred as adult versions of Hansel and Gretel in a film called Hansel & Gretel: Witch Hunters, directed by Tommy Wirkola (Dead Snow). The movie has been delayed a couple times, but is finally set to open in January, thanks to Jeremy Renner’s increased profile post-Avengers and Bourne.

The first trailer for the movie has been released, and it looks a little bit like Army of Darkness, and a little bit like the old Japanese action/comedy/splatterfest Versus, thanks to the fact that much of the action takes place in nondescript forests. And then, as many people surmised based on the premise and early photo, it also has a lot of Terry Gilliam’s Brothers Grimm spirit. That, being Gilliam’s dodgiest film, isn’t necessarily a good thing.