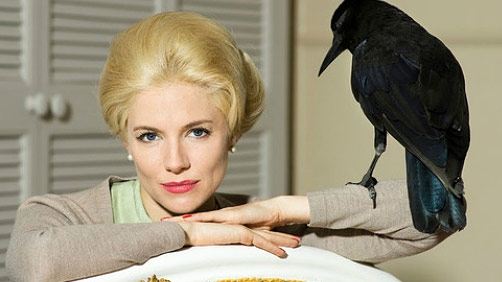 Many movie enthusiasts grew up on reruns of Alfred’s Alfred Hitchcock Presents television show. Call it ‘a twisted treat’ of mine that whenever I have need to take a few sick days off work I have a self-enforced Alfred Hitchcock Presents watching marathon. It’s one of the few programs that’s guaranteed to keep my mind off my dismal condition, and it helps that characters in his stories are going through worse problems.

Alfred Hitchcock was a remarkable filmmaker in his day, and for his craft he is one of my all-time favorite directors. Suspense is a tricky genre, and Alfred hit the mark in his films on many occasions. Since his film Vertigo has been counted as ‘the best movie of all time’ as of this summer, I’ve taken a closer look at Alfred and what made his classics stand out.

But there is another issue at hand that’s surfaced about Alfred in recent times, and the HBO television movie The Girl is shedding more light on the dark side of Alfred’s own lifestyle.

The film seems to play like an abusive marriage. It begins with Hitchcock discovering Hedren, depicted as almost a seduction of an innocent. Once filming begins he puts threatening pressure on her. For a scene in which birds attack Hedren, Hitchcock could have shot minimal takes. As The Girl shows, the scene went on for days, the underlying assumption being that he could make it stop if Hedren would acquiesce to his advances.

Of course, these are all the negative elements of Hitchcock and Hedren’s relationship concentrated into a single film, and in this case a two minute trailer at that. “There were times when it was absolutely delightful and wonderful, the times that we spent while he was my drama coach,” Hedren explained. “I hadn’t had any acting experience except in commercials. You get a good technical background for that sort of thing. But to break down a script, to delve into how you become another character, the relationship of different characters in the film was something that I didn’t know how to do, and of course, it was perfect to have someone as brilliant a genius as Alfred Hitchcock being my drama coach.”

It’s sad that one of the greatest directors of all time should be so spoiled to the core that he gave into such depravity. It is somewhat reflected in his films, and no doubt his own Id had a lot to do with the nature of his films — the subjects of the films follows patterns and interests Alfred had in his own life at times.

“I had not talked about this issue with Alfred Hitchcock to anyone because all those years ago, it was still the studio kind of situation,” Hedren said. “Studios were the power and I was at the end of that, and there was absolutely nothing I could do legally whatsoever. There were no laws about this kind of a situation. If this had happened today, I would be a very rich woman.”

Even though there are sexual harassment laws and a wide open public forum for any actor to share her stories in the media, Hedren hopes sharing her story now will protect the next generation of young actors.

It is good to acknowledge the slippery slope, but it’s most important to counter it with virtue. These days a story like Alfred’s life and his “foibles” might be digested for unadulterated amusement by many movie watchers, but it’s life stories like these that should stir a sense of tragedy and loss. Purity is valued but absent, and that’s why his story captures our attention — not to mention the deplorable irony.

Hopefully by Alfred’s ruinous example and The Girl film we will develop a greater appreciation for morality — the anchor that many forms of entertainment today has lost sight of.