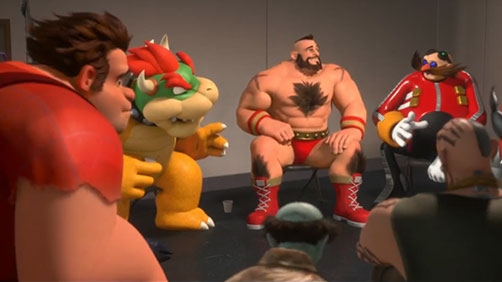 Children of the Nintendo generation, take heed: Disney’s Wreck-It Ralph was made just for you. In addition to setting up a rather compelling hero’s journey for video game character Wreck-It Ralph (voiced by John C. Reilly) — an arcade villain who goes “game-hopping” to reinvent himself as the good guy — the animated adventure stuffs in more Gen X/Y video game references than you can count. Who will weep for Bowser as he gives his testimony at AA for baddies!?

This really looks like a lot of fun actually. I’m getting a little tired of the major studios going down nostalgia lane, but I’ll cut them some slack on this one. Here’s the new trailer.