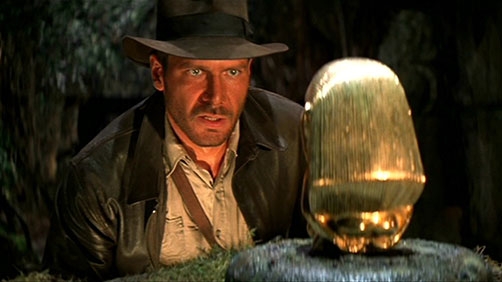 I had the opportunity to see Raiders of the Lost Ark this past weekend in its remastered IMAX glory. I have to say I was duly impressed. The film held up quite well for the most part. And seeing Indy “stick it to the Nazis” is always fun.

I must confess that I have not traditionally thought very highly of the Indiana Jones franchise. And I’m even talking pre-Crystal Skull. Until this past weekend it had been a couple years since I had seen the original trilogy, and I distinctly remember that they weren’t very good films. I have to say that Raiders of the Lost Ark is actually a far better film than I recalled.

The film impresses upon us right away it’s nature of action and what kind of man Henry “Indiana” Jones is. He’s a risk-taking treasure hunter, but he knows what he is doing. We also see there’s a villain who loves to let Indiana do all the work then profit from it himself. The first fifteen minutes of the film are filled with suspense and action over something we know very little about, but that’s okay because it’s not really the point. The point is to establish characters.

The focus of the plot soon becomes clear upon Indy’s arrival back home. Hitler wants The Ark of the Covenant but so do the Americans, and it’s Jones’ job to find it before those crazy Nazis do. At first I wondered what I was in for when the blurry, fuzzy, and jerky Paramount logo appeared on that ginormous screen. But my fears were almost at once laid to rest when the first real shot of the film appeared on the screen. It was vibrant and crystal clear. I soon forgot that this was a much older film, even though some of the effects would give it away from time to time, for the most part the film stood up very well to the test of that humungous screen. There were some notable exceptions. One such example is when we come back to the United States in the very first portion of the film and we have a couple of wide, establishing shots. These are blurry, shaky, and lackluster. And it happened a couple times throughout the movie, always on these sorts of establishing shots. There’s a shot where Indy pulls up to his house in his car, it’s twilight, and the shot looks like garbage. I think these must have been second unit shots, done on much lower quality equipment and/or film.

But they weren’t too bothersome. And actually, I walked out of the film saying to myself, “Well, they don’t make films like this anymore, and that’s too bad.” I’m not necessarily a proponent or fan of older films in general, but I do find that they often have a little something that newer films will sometimes lack — creativity. The filmmakers and actors poured themselves into the film, and they had to be creative and have a good story because they certainly were not going to be able to lean on CGI as that technology was so young and impractical at that point that it wasn’t an option. Modern films could learn a thing or two from Raiders. I think we can safely make the assumption that Spielberg doesn’t like Nazis. For starters, there’s the firing of Megan Fox for her comment about Bay being like Hitler. Also, he made Schindler’s List. And he doesn’t cast the Nazis in a very good light here either. The film is chalk-full of anti-Nazi sentiment. Particularly memorable, when Major Toht tries to pick up a “sacred” artifact, his hand becomes burned with the marks emblazoned into his hand (which cleverly also becomes a plot point). And of course the crates in which the Nazis transport the Ark of the Covenant has all its Nazi markings burned off. And in the end, the Nazis have their faces melted off by the “holy fire” from the Ark of the Covenant.

One of the things I really appreciate about Spielberg of late is his recognition that one really good way to ruin a remastered film is by changing stuff all around. As a huge Star Wars fan for instance, one of my biggest frustrations is the lack of availability of the original edits of the first three films. George Lucas keeps adding CGI, changing the order in which things happen and more. Most of these changes make the films worse with every tweak and we die hards hate it.

I’m not a fan of E.T., but fans of the film were quite put out when Spielberg made changes to the remastered edition of the film. And it seems like he learned something from that experience. He said in an interview for the IMAX release:

I learned from the fans. And now of course, we have the other group of fans who only know the other “E.T.” with the digital augmentation and that has become their standard for receiving that story. The only thing I think we can do is continue to manufacture and put out both versions. But it’s too complicated to that with any of my other movies – I’m pretty much going to release those films the way they were originally made.

There’s much more and I recommend that you read it. The point here is that things that even I would have been okay with him fixing were left as they were. And I am just fine with that. Don’t tinker with a movie, it can get dishonest sometimes.

A friend of mine pointed out to me that there was something he was expecting Spielberg to fix but that he did not in fact mess with. Apparently, and this was new to me, there was supposed to be a fight scene when Indy and Marion are escaping the snake pit and they emerge from the huge blocks. In the editing the scene was cut but in some scenes you can still see the guy laying unconscious. I missed it, but it’s apparently a big trivia item among the fans. Spielberg left it as is and I applaud him for the integrity to do that.

There’s a lot of fun to be had in this film. Some of it, cheesy and impossible, but still fun. How Indy’s whip manages to wrap itself around things and stay there while he swings wildly from it is the most comical mystery ever perpetrated. Watching Marion down impossible amounts of liquor and not get drunk, seeing Indy whip out his gun and shoot the crazy sword ninja, being chased by impossibly round boulders, dropping Indiana into a pit of snakes (and notable, a cobra that never strikes) Nazi vs. propeller blade, all this and more is still great fun. And there’s plenty of great action.

Of course, John Rhys-Davies as Sallah was delightful, and Karen Allen as Marion was also a great exercise in acting. It’s a mystery to me why they did not bring her back for the other two films in the trilogy.

Not All Fun and Games There is an element to Raiders of the Lost Ark that does concern me, namely the portrayal of the Ark itself. If you are a Christian as I am you may have the same concerns. I still find it to be fairly sacrilegious. Spielberg ascribes to the Ark some mystical power or energy, or at the very least some significance it no longer possesses. The Ark was ever only a symbol to God’s people and carried no real power. Indy and co. talk of the power it posses and how armies fell before it when Israel carried it to battle (not strictly true). And they ascribe to it a mystical power such that, when opened, it consumes its enemies. And somehow instinctively, Indy knows that he needs to close his eye and instructs Marion to do so as well (why, we don’t really know).

I usually can’t talk about a film without talking about its score, and Raiders of the Lost Ark is no exception. The score was composed and conducted by John Williams and performed by the London Symphony Orchestra. And on technical execution I cannot fault it. Of course “The Raiders March” is brilliant, as is the case with most of Williams main themes. I have often been known to say that John Williams themes are brilliant. He has composed such classics as the Superman Theme (I still get chills listening to that wonderful theme), Star Wars Theme, The Imperial March, Jaws Theme, Home Alone Theme, Harry Potter (Hedwig’s Theme) and more that I’m sure I’m forgetting to include. My point is that he does great themes, but most of the films that he has done, while I love the theme, I hate the overall score. John Williams often fails to capture the spirit or feel of a film, and on Raiders this is very keenly felt by me. My wife watched it with me and she commented on this phenomenon to me without prompting from me. She and I both often felt as if the music was trying to transport us to the Star Wars universe. In fact the music Williams uses when Indiana Jones is in deep sadness over the “death” of Marion feels like an almost direct lift from Star Wars.

Williams also doesn’t understand the meaning of the word “subtlety”. His music is almost always bombastic and overbearing, giving the film no musical sense of mood or build or tension. I know many will very much disagree with me, and this is my own personal opinion and taste on the matter, but I know I am not alone when I talk of this and say that John Williams is over-rated. But getting back to the good stuff, one of the things that I find missing these days is a good solid, fearless action hero. Yes, I like a good, complex protagonist, but sometimes I also just like my heroes to be heroes. Indiana Jones is the embodiment of a fearless hero. What’s interesting is how great it was to cast Harrison Ford in this role in retrospect. But at the time, Ford was less well known. Sure he had done Star Wars, but could he pull off a role like this? History says yes, and that he did it quite well.

This is something I would like to see brought to the modern movie era a little more often than we are seeing right now.

All things told, I enjoyed seeing this on the big screen. This actually being the first time I’ve seen this film in theater I can’t say I saw it in theater again, but I did enjoy it and I give this film a solid 3.5 stars of good fun, great entertainment, and awesome Nazi bashing.