Snow White and the Huntsman — Review 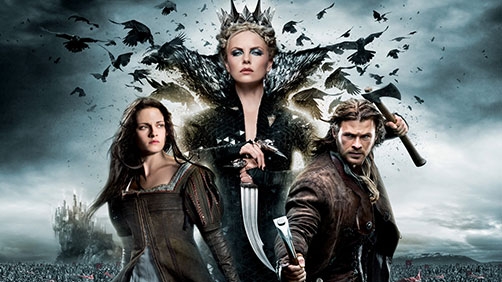 This is not the Disney Snow White you may remember from your childhood. Snow White and the Huntsman straddles a much more fine line between gritty realism and a fantastical, magical world of evil queens, magic, dwarves, trolls and more. This rendition of Snow White is ultimately a tale of good versus evil. There is a natural order to things, and Snow White understands and uses that order to great effect. In fact there is quite an allegorical nature to this film. At the beginning, evil appears to be triumphing (the fall), we see that there is a remnant of those who are still loyal to the fallen king, there is a point of sacrifice, and the final victory. Yes there is much allegory here. It seems many good stories tend to mirror in some fashion mankind’s own overarching story. The Queen’s seduction of, and subsequently killing the king and taking over with death and destruction bears remarkable resemblance to the fall of mankind. The Queen is obsessed with her beauty and she consumes the life of young and beautiful girls to remain young and beautiful.

The interesting thing here is that the film goes to some great lengths to show how Queen Ravenna justifies her actions to herself. She has some twisted logic about how she is a merciful queen because she provides better care for her subjects than the care she had in her upbringing. We get a flashback of her when she was younger and the dark magic that was used by fairest blood to give her the dark power to maintain beauty and allure.

Charlize Theron is an interesting choice to play the beautiful queen next to Kristen Stewart’s Snow White — many would consider Charlize to have far more beauty, and certainly more allure than Kristen. But I think this actually serves the story quite well. Ravenna has outward beauty, grace, and seductiveness, but there is more to true beauty than that. Kristen Stewart is attractive enough but her true beauty as Snow White is far more than skin deep. Speaking of Stewart’s Snow White, I have often seen a lot of ragging on Stewart in any roll, and I often see it in reference to Snow White — the sentiment is, “Kristen ‘Bella’ Stewart as Snow White? No thank you!” But I find this to be completely unwarranted. Whatever you think of Kristen’s personal life or the roles she has played, she seems to be a quite capable actress and I believe has had an unfair amount of stigma attached to her simply because of her roll in Twilight, which so many deride.

Stewart is often accused of being emotionless and lacking the fortitude to play the sorts of rolls like Snow White with the depth necessary. But I found her performance to be full of emotion here. She showed great emotional range and I did not ever get the sense that this was Bella I was looking at.

Snow White, now Ravenna’s stepdaughter, is locked away in a tower for years, ostensibly because, “you never know when you will need royal blood.” This of course proves to be her undoing in the end.

Snow White is afforded an opportunity to escape her tower prison when the Queen sends for her after discovering if she eats her heart she will live forever. She finds her way to the Dark forest and would probably have died there if not for The Huntsman. Snow White and the Hunstman has obvious inspirations from the original fairy tale. We don’t know much of the Hunstman in the original, only that he could not bring himself to kill Snow White for the queen and brings her the lungs and liver of a boar instead. In this film adaptation, we find the Huntsman has lost his wife, who we find later was killed by Ravenna’s brother. He has been attempting to drown his sorrows at the bottom of his beer mug, getting in bar fights, and general living the low life. When the queen calls upon the huntsman to hunt down Snow White in the dark forrest and bring her back, the Huntsman refuses. When threatened with death by spear, he says with bitterness, “Do me the favor, I beg of you!” The queen changes tactic and offers instead to bring back his wife from the dead.

Upon finding Snow White he is unwilling to hand over to the queen’s brother, demanding to know what they would do to her, and demanding that the queen first fulfill her obligation to restore his wife.

So we find the Huntsman is in a very dark place indeed in act one of the film. But we see a change in him throughout the course of the film, due as we see to the influence of Snow White, whom he falls in love with.

And with those three characters we have the triangle that makes the film. Yes there are other good characters in the film, yes there are seven dwarves, but this triangle makes or breaks the film. And I can’t complain in any way about the actors and what they brought to the table as the backbone of the film.

In watching this film for the second time with the home entertainment release, I was struck again by the beauty of this film. This is modern filmmaking at its best. The cinematography is beautiful and well executed. Where CGI is used, it is used well. I particularly enjoyed the production design of the queen’s surroundings which fit the character and mood very well, the sanctuary where we get some very beautiful shots not the least of which is Snow White in silhouette walking toward the rising sun, and several aerial shots throughout the film.

An Apple a Day… One interesting twist that I was not expecting, but that I thought was absolutely brilliant was the way in which the poisoned Apple was used. We were all expecting it of course, and we all know the story. But this film surprises us a little by making us think Snow White is just having a casual conversation with William. In the second viewing, and knowing what was coming of course, I picked up on a few more cues that something was amiss here, but in the first viewing, while something seemed unsettling, I did not suspect that the Apple would come from the Character of William and so until he presented the Apple I did not suspect at all.

While I greatly enjoyed this film, I did find it to have one main weakness. I did not feel that the film spent enough time developing chemistry. The relationships felt rushed. There are ways to develop these things over the course of 2 hours, and this film did not utilize them and instead seemed to assume chemistry. If they had simply made the events unfold over a longer period of time I think perhaps the relationships would have been more believable. As it was you wonder what it was that captured the heart of the Huntsman so completely in the course of a day or two. Or how the dwarves would so quickly abandon their less nobel ways and completely give themselves over to Snow White’s cause. And you wonder why on earth the small remnant of good people left would follow Snow White on what seemed like a suicide mission to try to dethrone the evil queen.

Perhaps it was the speech Snow White gave about iron melting and writhing inside itself… oh, no wait, that was completely nonsensical, that can’t be it.

Another thing I found really irritating was the kiss that brought Snow White back from her death sleep. While this film is to be applauded for using well known plot devices and imagery to great effect without diving into the realm of hackneyed and overused plot contrivances, one area I thought would have benefitted from getting a little closer to that was this Huntsman’s kiss. As it appears in the film, neither seem to know that his kiss woke her and after it happens the film moves on. It was a little bit of a let down.

As is becoming my habit in these reviews I must talk about the music for it was glorious. I’m really beginning to like Howard for his appropriateness at all times in the films he scores. He seems to really understand the mood and need of the moment. And of course the opening strains are some of my favorite music in cinema at the moment. He also knows how to use subtlety well. It’s hard to put a finger on it exactly, but there was so many time through out the film where he was able to subtly shift the mood, or affect what was going on in the way it needed to be affected.

This goes right along with how I felt about his work in The Hunger Games. As in that film, here in Snow White, Howard knows when not to use music as well. Though not as pronounced as The Hunger Games because this film is so different stylistically, you can still see the appropriateness of the times when no music is present in the film. These decisions are as important as the decision of what type of music to use with what scene.

One particular part of the score I also really liked was the use of a single vocal song somewhere about in the middle of the film. It is somewhat stark, but as it progresses, it leads into very subtle musical undertones and instrumentation and develops into something very beautiful.

In my opinion, this is a worthwhile film for your library. It’s a new take on an old story that is very satisfying, with plenty of great messages and morality. And who doesn’t love a good old fashioned “Good versus Evil” tale? The evilness of the queen is dark indeed, which is the way I personally like it, but it’s worth noting because you may not want to let very young ones watch.

In both of my viewings of this film, in theater, and on my television in home entertainment release, I greatly enjoyed this film and give it my recommendation.