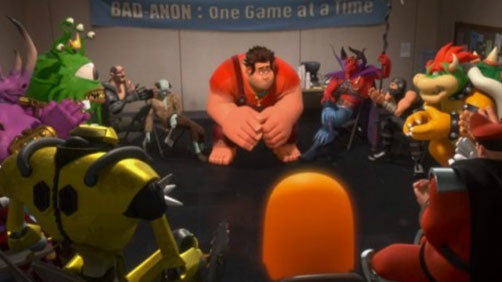 Everyone is either looking forward to Wreck-It Ralph or still refers to video games as “those beeping boximacallits.”  There are no other options. Gaming movies have a bad reputation, which is weird, because, despite what you may have heard and read, they have yet to materialize. We’ve seen dozens of action movies that share the titles of video games and little else, and run from reprehensible to ridiculously profitable — sometimes in the same series. We’ve also watched feature-length advertisements for video games that we’ve paid to see in hopes that there might be a movie in there somewhere. Case in point: Universal Pictures’ The Wizard. But that may be about to change.  Disney’s Wreck-It Ralph could be the first true gaming movie — the first of a genre that could some day stand alongside war, horror and gangster movie genres. It’s a genre whose time has come. The children being brought to the latest Disney movie have grown up with games, while their parents have watched their kids — and the games — grow from simple noise-making bundles of reflexes to fully interactive 3D characters.

I am really looking forward with a certain glee to this movie, and I was never even really a serious gamer. I’m mostly a Mario guy. I currently have all the major Mario titles for my Wii via the Limited Edition disc of Super Mario All Stars for Wii, Super Mario World via Virtual Console Download, and Super Mario Bros. Wii. So yeah, I’m a bit of a Mario geek but that’s really as far as it goes for me. Which is why I found this next quote funny:

The cruelest (but most accurate) gaming revelation was the presence of Sonic and Bowser, but no Mario. The writers told TotalFilm.com  that Mario is such a powerful character that there would be no way to put him in the movie without him dominating it. But Sonic? Sure, stick him in there. There was never any doubt about who won the ‘90s battle between him and Mario — and his inclusion removes any doubt that the writers really understand the games they’re referencing.

Yeah, pretty much. I like Sonic well enough and have played some of the Sonic games here and there, but he just doesn’t have that special place in my heart.