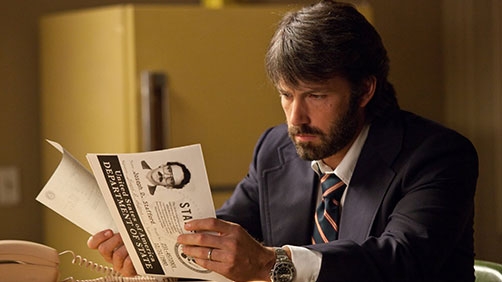 I’m a big boy and I can admit when I’m wrong. As it turns out, I was wrong in my pre-judgement of this film. I’m not sure why, but this film looked like a painfully laborious snoozer to me from the trailers. Nothing could be further from the truth. Argo, though a story developed on a preposterous set of real events that took place, is a well crafted and well executed film full of suspense, tension, and heart. And though the fake film being “made” in Argo, which is called Argo, is an obviously corny and cheesy over-the-top sci-fi, Argo rises so far above the films coming to the box office of late that one wonders how such greatness got a green light. Didn’t someone, somewhere, realize this film might make all the other films coming out look bad?

November 4, 1979 was the height of the Iranian revolution. Militants converged upon the U.S. Embassy in Tehran and took 52 American hostages. However, six Americans escaped unnoticed and took refuge in the Canadian ambassador’s home. These men and women obviously need exfiltration. Specialist Tony Mendez, played by Ben Affleck is called in and eventually determines that the best course of action is to pose as a filmmaker on a location scout for his exotic sci-fi scenes. So he needs to go in, convince the Iranians he’s a Canadian filmmaker and these six people are Canadians who are part of his crew, do a location scout, and then get them on a plane and out of there. This film is essentially a drama thriller, with a very spare sprinkling of comic relief. And drama abounds aplenty. In fact through the whole first act, there is very little thrill, and a lot of story set-up. But even so, there is a lot of drama unfolding as well. No part of this film was boring, which was surprising to me — again, I can admit when I’m wrong. And I was indeed surprised that as the story unfolds, the idea of making a fake film to exfiltrate the six Americans did not seem forced. Yes I know the film is based on a real story, but all I could think about when watching the trailers for Argo was, “Really? This seems so contrived.” But it does not feel that way at all when watching the events unfold. By the time Mendez comes up with the idea of posing as filmmakers, you really believe that this really is the best bad idea available from a sea of no good alternatives.

But what really snuck up on me was the thriller aspect of the film. By the time we came to the critical climax — getting our crew out — not only had I unsuspectingly come to really care about those six people, but I was on the edge of my seat (mostly, I speak metaphorically). Even though I knew that they made it out, the tension was real and believable. And as I alluded to, part of this was the way in which we got to know and care about the six stranded and now endangered Americans. During the first act of the film, we didn’t get to know them very well and I wondered on some level, why I was supposed to care for them. Of course, as human beings in that situation we should care for them, but I mean on the level that was obviously going to be necessary for the film. And as the story unfolds, it really sneaks up on you. I didn’t realize that I cared as much as I did for that crew until we came to the climax when everything almost falls apart. This is good story telling. I haven’t seen Ben Affleck in many films, in fact the only other film I have seen him in that I can bring to mind is The Sum of All Fears which I also liked very much. But I hear that some of Ben Affleck’s work is not the best. Specifically his comedies tend to not be all that comedic or work very well. But let me assure you that in Argo it is safe to say that both Ben Affleck’s directing and performance is nothing short of first class. Ben Affleck makes us believe that Mendez really cares about what happens to the stranded Americans.

As well, Bryan Cranston’s performance as a big guy in an early ‘80s CIA is really great. He has both the demeanor and the acting chops to pull of the look at the feel of the role.

I was also pleasantly surprised with John Goodman. After his terrible performance in the otherwise good film Trouble with the Curve, his performance here was stellar. Perhaps it was because this role was able to be played with a little bit more pompousness and flamboyancy, and perhaps that suits Goodman better.

And though I do not know much about all the actors that played the six Americans — the only one I really recognized was Clea DuVall — I was sufficiently pleased with their ability to make me care about the characters.

Anything wrong with this film?

It is really difficult to find fault here. The only fault I’ll find is that despite that fact that I did come to care about the men and women stranded and in fear of their life in Iran, I wished that somehow they would have been fleshed out a little more — that somehow we could have lived with them just a little bit more. This film focuses a lot on Affleck’s character and the events taking place in the U.S. and not quite enough on our people in Iran.

In addition, this film is rated R for language and some violent images, but mostly for language. The F-bomb is dropped liberally throughout the film. In some ways, this makes the film more believable, because you believe that these people, in these situations, or simply even sometimes as these characters, would use that language. But it is something to be aware of and you may not want to catch it in theater if the liberal use of such language bothers you. I can’t stress enough, I do mean liberal use of language.

Argo is a fine film and will certainly have a place on my shelf when it comes to the home entertainment release. This is one of those rare gems of quality in a glut of the ever increasing amount of fools gold, or downright plain old dirt. The craft wielded by Affleck in this film is stunning and worthy of praise.