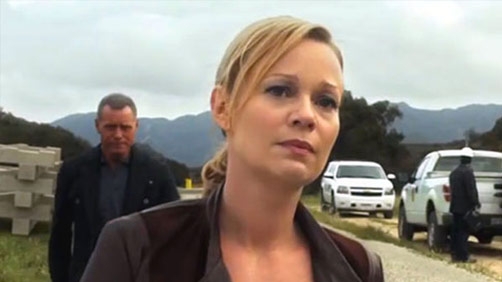 A worried Dagney Taggart is piloting a private jet through a winding mountain ravine. She is in hot pursuit of another jet carrying the only man left that can help her save Taggart Transcontinental, and that said plane is speedily moving straight into the side of a rocky mountain slope.

Before her very eyes, and much to her disbelief, Dagney watches a flash of blue light consume the jet and leave nothing behind — leaving the cliff face not so much as scratched. But now it is too late for Dagney, since her jet is much too close to the rocks. Her deadly fate is sealed for sure, and this is the end of all things as she knows them.

Flash-back to a moment several months before…

Thus begins Atlas Shrugged Part II - The Strike, much like a flash-forward scene from the Lost television show.

Let’s step back and look at the whole of the storyline. The production studio, appropriately named Atlas Distribution, published this synopsis:

The global economy is on the brink of collapse. Unemployment has risen to 24%. Gas is now $42 per gallon. Brilliant creators, from artists to industrialists, continue to mysteriously disappear at the hands of the unknown. Dagny Taggart, Vice President in Charge of Operations for Taggart Transcontinental, has discovered what may very well be the answer to a mounting energy crisis — found abandoned amongst the ruins of a once productive factory, a revolutionary motor that could seemingly power the world. But, the motor is dead… there is no one left to decipher its secret… and, someone is watching. It’s a race against the clock to find the inventor before the motor of the world is stopped for good. Who is John Galt?

I had hoped Atlas Shrugged Part II would answer this question. Now that I’ve seen this sequel, I’ve grown to dislike the rhetorical question “Who is John Galt?” almost as much as Dagney has in this installment, and simply don’t care to know anymore.

What went wrong in this film? Are the critics giving it a cold shoulder? Is there something timely about Atlas that relates to this election season? Has this film been worth the major loss to the studio producing it?

Faithful to Ayn Rand’s Atlas Shrugged
The original intent of Ayn Rand’s novel is honored. This is especially challenging for a film adaptation that modernizes this 1950s story, but it works. It’s a compliment to the timelessness of its story that it can easily be appropriated to relate to a new generation.

There is another reason this is so impressive: The novel is huge (more than 1,000 pages). It is never easy to adapt a long-winded novel to film, as Twilight is a testament to (and Twilight is less than 500 pages in length).

The movie does well-enough to encourage me to listen to an audiobook version of the novel. As I see it, the film is a promo for the much richer literary work.

A lot achieved with relatively little budget
My hopes were too high for this film considering the budget constraints. I wish that Atlas Shrugged would get the royal treatment, like a Tom Clancy novel-to-movie adaptation starring Harrison Ford and Sean Connery. But, alas, Atlas Shrugged Part II has not.

For the epic demands of Rand’s story, a budget of $25 million is barely enough to make a good film. There are complex shots in expensive locales. It has an unusual number of characters and sub plots. It requires sci-fi visual effects. There needs an impressive cataclysmic bullet train wreck….

A Better Production Value
Not to belabor a comparison to Part I, Part II has a larger budget and that is absolutely vital to this film series. It is important to note because it is not easy to raise funds for Atlas Shrugged. Liberal Hollywood won’t have anything to do with it, so it is up to wealthy capitalists to fund the Atlas Shrugged film(s) out of charity. The budget that was spent on Part II was put to much better use than Part I’s.

Some people know a bad film when they watch the trailer. I am one of those people, usually. It doesn’t take much to know in your gut that something just isn’t working — for you. Well, I’m sad to say that within three minutes of watching Atlas Shrugged Part II I knew that I was in for a letdown and a snoozer. Here’s why: A Careful Product of Wild Imagination
The most disappointing trait, I believe, is that I couldn’t get sucked into the movie for a moment. I was aware I was watching a formulaic execution of an otherwise intriguing premise. It looked and behaved like make-believe. At times, Atlas is told like a parable set in modern times, and this doesn’t help. Frankly, it is insufferable because it fuels the elititism that is misunderstood by many in the audience.

Films like Argo, Les Misérables, or even The Ides of March are great examples of captivating and alluring political dramas. I hoped that Atlas would be more like these, offering a lot of nuance in the meta narrative. Atlas Shrugged Part II tries to, but I’m hardly ever close to accepting it.

New Cast & Performances
For this sequel the actors were completely recast. I did not mind this as much as I thought I would. When one actor is replaced it is jarring, but when every one of them is replaced it feels like a different manifestation; a different take on things. This is understandable and well-presented in Atlas.

What didn’t work for me about this cast was their acting. I didn’t believe their performances. Some were so poor, I thought, that I had trouble believing the human emotions the characters expressed. Especially awful were the performances of Patrick Fabian (James Taggart), Jason Beghe (Henry Rearden), and Samantha Mathis (Dagny Taggart). Either by their lack of conviction, two-dimensional indifference, or a general sense of B-acting, I was disappointed in their interpretations. They would have been okay performances for supporting characters, or for a television adaptation of Atlas Shrugged, but the cinema is the big leagues. They just didn’t cut it for me.

Repetition and Very Little Progression
Many scenes were developing a grander conflict and did little to further the story. Other scenes were setups for later payoffs. By the time the film ended, I felt like very little had really happened besides a lot of talk and little show. Payoffs were weak and short-lived.

Ideally, The story should not have repeated so many of the themes and character developments that existed in Part I. Or, to make up for the otherwise unrefined Act 1 and Act 2, it might have helped if this film had a powerful climax.

Tiresome Melodrama
Yes, I grew so bored with Atlas Shrugged Part II that I nearly dozed during Act 2. It’s not often that a film does such a poor job of holding my attention that I nearly fall asleep. Typically, films that make me drowsy are classics with actors I’ve never heard of — films I’d only watch because they won several awards, or have some other notable amount of praise.

Who knows why a story looses our attention… I just know that a true tell that a film is worthy of praise is that it never ever — with repeated viewings — allows me to drift into a nap. Calling It How I See It

As mentioned time and again, the critics are brutal to Ayn Rand, her novel, and the films. Atlas Shrugged lauds many political views that are not accepted in the mainstream media and academia. But traditional conservative, libertarian, and libertine values are the basis for this story’s very existence, and the story would not function without them. You will never see a version of Ayn Rand’s story that is effective without these political principles embedded in it.

It can be difficult to appreciate anything that is so very staunch in its message when you personally hold to values that are quite to the contrary. But more than simply deriding a film on its own film qualities, many critics make outlandish criticisms about Atlas Shrugged that are not especially insightful or well-reasoned . Like this one from Alan Scherstuhl at Village Voice:

Seriously, if this is the best promotion of itself that the free market can manage, it really would benefit from the help of a Ministry of Culture or something.

No special authority of the free market ever said Atlas Shrugged is its best promotion, please… And there are many other such non-sensical false arguments made about these films. Let’s not be so quick to forget we want to preserve the right of free speech — not just the free speech that we agree with. No person ever persuaded another intelligently with sarcastic quips. It is juvenile.

That said, if you already appreciate libertarian political values, then you will more than likely enjoy Atlas Shrugged Part II: The Strike. And the good news is you don’t need to see Part I to understand Part II.

Adjusted for inflation, Atlas Shrugged Part 2 is no. 98 on the Worst Openings Ever chart, and despite a much wider release than its predecessor will quite possibly end its run with less than $4m at the domestic box office — or rather, at the box office, period. Reportedly budgeted at $20m, Atlas Shrugged Part 2 will find no following internationally, as Ayn Rand’s Tea Party-embraced views (minus Rand’s derision of religion and the blindly religious) are a purely American phenomenon.

I still haven’t read the novel Atlas Shrugged, largely because the original film made it look so boring, but the result is that certain elements of this movie trilogy elude me. I’m particularly hazy on when it’s an appropriate time to ask “Who is John Galt?” in casual conversation. Depending on the scene, the query can either be a fatalistic exclamation, a damning expletive or a casual punctuation. This willy-nilly application of an obvious catch phrase robs it of its dramatic power. Despite his overwhelming influence, John Galt’s identity is a much less enticing mystery after two whole films than Keyser Soze’s was after just half of The Usual Suspects.

Released just in time for the presidential elections, Atlas suggests that Galt would be a dyed-in-the-wool member of the Grand Old Party, perhaps a little like Mitt Romney, a business magnate whose running mate, Rep. Paul Ryan of Wisconsin, once endorsed Rand’s philosophy.

The standard bastions of right-wing intellectual or political power have never loved Rand — and Mitt Romney’s vice presidential candidate Paul Ryan has run away from his reputation as a professed fan of hers. Her stance on the limits of government’s rightful powers are too stringent, her hatred of the irrationality of religion too blazing. Still, Atlas II is tonally aimed at an obvious right-wing audience, the sort who thought Romney was right-on with his comment about the 47 percent of Americans who live off government and see themselves as victims. Romney didn’t use the Randian terms “looters and moochers” for those who live off taxes but he might as well have. The film features Fox News’ Sean Hannity in an as-himself cameo arguing Atlas’s theme, as government tries to confiscate metal magnate Henry Rearden’s amazing amalgam, “Rearden metal.”

The production company for the second film, Either Or Productions, LLC, is taken from the name, Either-Or, that Rand gave to the middle ten chapters of her novel. An April press release stated the name of the film as Atlas Shrugged, Part 2: Either Or.