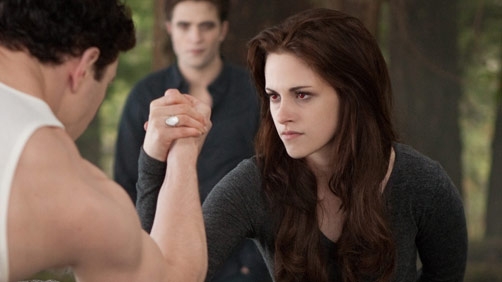 The new film sees the Cullens bond together against the Volturi as the council of vampire elders come looking for their daughter, Renesmee. There stands to be quite the smackdown.

They are such a tease! Just when you thought that Emmet would beat Bella, *cut*. I guess now we’ll never know what happens, or we must watch the movie to find out. Yikes.

By the looks of it, the scene is shot in the same choppy/jarring way the other three Twilight films could be at times. Amateurish. And the comical cheesiness oozes to the point of looking grotesque, in a vampirical sort of way.

But we’re all getting excited with anticipation to see the end of the Twilight series, and all of the stupidity that comes with it, right? *wink* *wink*