‘Cloud Atlas’ is a Self Important Mess — Review 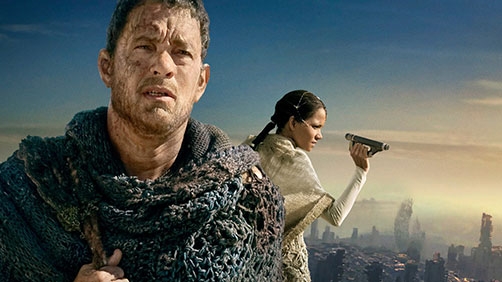 “Our lives are not our own…”

That’s certainly the way I felt when watching Cloud Atlas for three hours in the theater. My life was no longer my own, it was hijacked by a very bad movie. I have never walked out on a film, and that statement is still true even after Cloud Atlas, but I wanted to walk out of this one.

Not that there weren’t enjoyable moments, but there was no cohesive whole. And the further into this three hour nightmare I went, the more I began to question whether the film would ever make any sense.

How Many Threads Now?

Cloud Atlas follows six different story lines. With a lot of help from Google I have put them together here in a bit more coherent manner than the film does. A ship crossing the pacific ocean carrying Dr. Henry Goose (Tom Hanks), who poisoning Adam Ewing (Jim Sturgess) so that the doctor may steal from Ewing. The ship is also carrying a stowaway slave whom Ewing has compassion on and is speaking up for. The slave ultimately saves Ewing from the poisoning, and upon returning home, Ewing and wife go to work on the abolitionist movement.

Ostensible Connections: Adam keeps a journal that Robert Frobisher discovers in story 2
Connection Success: Weak - I had a hard time tracking this one in theater and am only sure of this connection through Google.

Robert Frobisher (Ben Whishaw) is a a homosexual composer who apprentices himself to Vyvyan Ayrs (Jim Broadbent). The latter attempts to claim the former’s work as his own and gets shot. Robert is continuously writing letters to his homosexual love Rufus Sixsmith, whom he tells at one point that the composition he’s working on (the Cloud Atlas Sextet) is the most important work ever (or something like that) – we are never told why. After finishing the composition, Frobisher kills himself for reasons we are not told.

Luisa Rey (Halle Berry) is a reporter trying to bust open some big bad story (I never really did figure out what the deal was, was it some sort of nuclear power thing?). She’s being stalked and hunted by none other than a big bad Bill Smoke (Hugo Weaving), apparently hired by the company she’s trying to dish the dirt on to stop her by any means necessary. At one point seemingly completely unrelated to her investigation, she finds a recording of Robert Frobisher’s Cloud Atlas Sextet composition of which she says, “but I know it… I know I know it.” We are not told why she would know it or what connection that could possibly have.

Ostensible Connections: Timothy Cavendish receives Luisa Rey’s manuscript.
Connection Success: Weak. I got the connection, but so what?

Timothy Cavendish (Jim Broadbent) is in trouble with the brothers of his gangster client and is subsequently confined against his will to a nursing home from which he cannot escape (this one was probably the least interesting storyline). He finally does escape with a few others in some daring maneuvers.

Ostensible Connections: Vyvyan Ayrs’ (Jim Broadbent) mansion in 1936 is now Timothy Cavendish’s (also Jim Broadbent) nursing home of 2012. In 2144, Sonmi-451 sees a film of his ‘ghastly ordeal’. Timothy also has a dream of Papa Song Café where Sonmi-451 works.
Connection Success: Weak. Who cares about the film about his ordeal? And what is the reason for his dreams of the future?

Sonmi-451 (Doona Bae) is apparently a clone, or as they are called, a fabricant — a genetically engineered worker drone. But she starts to think for herself. Unexplainably she is rescued by the resistance because she is, like, “the one” or something. She reveals to the world what is going on before she is captured and executed. And a recording of this exists for future discovery.

Ostensible Connections: Sonmi-451’s recorded statements become the tribal wisdom for Zachry’s tribe and they worship her.
Connection Success: Works. Perhaps the strongest connection of the film.

Zachry (Tom Hanks) is a goatherd, in a post-apocalyptic world. Meronym (Halle Berry) is trying to get word out to off-world colonies to come rescue them. This post-apocalyptic world is apparently savage with very few civilized people left. All of Zachry’s village save him and one little girl is lost to some extreme cannibalistic savages, and they along with Meronym and her ship’s crew are apparently rescued and taken to an off-world colony.

Ostensible Connections: This is the culmination of everything, apparently.
Connection Success: Remind me why I care?

And thus endeth the journey. So what? What was this story about? As it is presented, it appears to be about nothing. The events lead up to the rescue of three people from a savage society to live out the remainder of the lives off-world. Many of the connections from story to story are vague and undefined, often so subtle that try as I might in the theater, I could not find the connection. It is only now with the help of Google that I understand the connections better. But the question still remains, what was this film about? And I have no answer that satisfies me.

I think what the filmmakers were trying to say was that our lives are all intertwined and that anything can affect everything. But it was not satisfying — or perhaps I should say it was not presented or told in a satisfying way.

Story is a tool, such as a very sharp ax. In the right hands, a story can be a very effective tool. Much like an ax, it can be put to any number of useful tasks, but put an ax in the wrong hands or wield it in the wrong way and it can be really dangerous. In the case of Cloud Atlas I feel as though the filmmakers took a very sharp ax, turned it around to use the blunt side, and bludgeoned me over the head for 3 hours (three days later, the dull ache in my head still remains).

This film is such a jumbled mess of incongruous thoughts, badly connected story, and poorly executed narrative that its a wonder anyone agreed to let this film be made.

I don’t, as a rule, mind non-linear story telling if it is done in a way that can be followed, or in a way that the pieces can be put together by the audience when needed. But this film was so ineptly put together in it’s non-linear style of story telling as to leave me scratching my head. Days later, and with the help of Google, I still can’t fit it all together in a way that completely satisfies me. The editing is a jumbled mess of cuts from scenes set in the future, to scenes set in the past and back. There seems to be no rhyme or reason why we see anything in the film at any given time. There is almost never a direct correlation to what is going on in the past that would prompt a cut to the future to see how that particular scene affected the future. This is probably because there is little effect from the past to the future, the connections are so very thin.

It’s funny, from the trailers, I expected this film to be very much about reincarnation. In the film, though the same actors were playing different roles in different time periods, I did not get the sense that they were supposed to be reincarnated from those previous characters. Perhaps it was because I was expecting the angle to be taken much more forcefully. And I do seem to be the only one that didn’t get the reincarnation thing as much as I was supposed to. Upon my reading of various reviews of this film post-viewing, and reading things said by the filmmakers themselves, the idea is that every time you see the same actor playing a role, it is the same “soul” reincarnated — that they are on a soul journey, evolving and learning. Perhaps this explains why Louisa Rey said she was sure she had heard the Cloud Atlas Sextet before. But the connection is so weak that even though I was expecting it, I didn’t quite get it. Love is in the air

Many of the six threads involved some love affair or other. In thread one, Adam Ewing is trying to get back to his wife whom he loves. In thread two, Robert Frobisher has a homosexual relationship with Rufus Sixsmith. Sonmi-451 falls in love with Hae-Joo Chang. And Zachry falls in love with Meronym. None of these, save for Zachry and Meronym were believable in the slightest. And obviously, again as a Christian, the homosexual relationship was just messed up. Of course too there is the question of how much do you love someone if you commit suicide? Which leads me to:

What was the point of Robert Frobisher’s suicide? Why did he want to commit suicide and not let Rufus Sixsmith see him when he was only feet away, and he knew that? Are we saying that suicide is okay because we’ll just be reincarnated?

I found this whole suicide thing both senseless and disgusting! Of all the pointless things in the film, this just about trumps them all. It wasn’t even presented as if he was at the end of his rope or something, it was like he was doing some higher, noble thing.

It is obvious that the filmmakers through their style of story telling think very highly of the things they are trying to say — that they are saying something transcendent and profound — and they are profoundly wrong. The only way any story every works is when it realizes it’s place, and Cloud Atlas does not. It has nothing important to say and so the seriousness and gravity with which this nothing is said makes for a very poor film viewing experience, as if you are slogging through very thick mud on a very rainy day.

There was absolutely nothing remarkable about this film in any way. None of the stories in this film would ever be interesting enough to make it into a film. Probably not even a short film of any value. So how does putting them together into a big 3 hour extravaganza help? In a word, it doesn’t.

I literally, and for the first time in my life, have nothing good I can say about this film. Others may, and I will grant them that, but I do not. Cloud Atlas is by far the worst film I have ever seen.