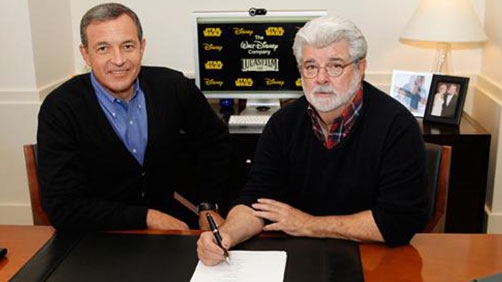 “For the past 35 years, one of my greatest pleasures has been to see Star Wars passed from one generation to the next,” said George Lucas, Chairman and Chief Executive Officer of Lucasfilm. “It’s now time for me to pass Star Wars on to a new generation of filmmakers. I’ve always believed that Star Wars could live beyond me, and I thought it was important to set up the transition during my lifetime. I’m confident that with Lucasfilm under the leadership of Kathleen Kennedy, and having a new home within the Disney organization, Star Wars will certainly live on and flourish for many generations to come. Disney’s reach and experience give Lucasfilm the opportunity to blaze new trails in film, television, interactive media, theme parks, live entertainment, and consumer products.”

Translation: So long suckers, I’ve had my fun, I’ve made my money, I’m out of here.

Actually, Star Wars out of the hands of Lucas seems like a good thing to me. The prequels just weren’t up to the level and story telling of the originals. I am intrigued, if a little bit skeptical of a seventh feature film.