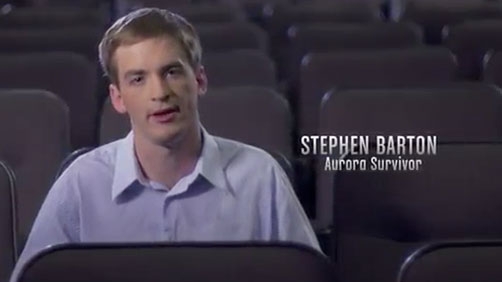 While attending a midnight showing of The Dark Knight Rises in Aurora, Colo. this summer, Stephen Barton was shot in the face and neck. But compared to several other victims, he was lucky; Barton lived, and now he’s working to raise awareness of gun violence. According to his new PSA, 48,000 Americans will be shot and murdered during the next four years — “enough to fill over 200 theaters.” He urges viewers to visit DemandAPlan.org, an organization that’s working to end gun violence. See Barton’s poignant PSA below.

Because we just absolutely have to take a tragedy and make it political. It makes my blood boil.

Joseph pointed out to me in the first draft of this entry that I sounded a little compassionless. Please understand that I am deeply sorry about the tragic events in play here. I have nothing but compassion for this young man. And much more even for the families of those who lost loved ones because of this shooting.

But this is actually exactly why this business with the PSA makes me so upset. Turning this tragedy into a political opportunity makes me want to scream. Outlawing crime will not abolish crime, which seems to be indicated by this PSA. Indeed crime is already illegal (this is the theory of duh). As for the question to which presidential candidate has a plan to stop gun violence, the implications are astounding. Why are we making crime the president’s responsibility? Why are we making this political?