Thanks again to Corey for submitting another reader contributed review. If he’s not careful he’s going to become a regular contributor. We welcome the interaction and collaboration, and I’m pretty sure I need to see this film now. Enjoy. 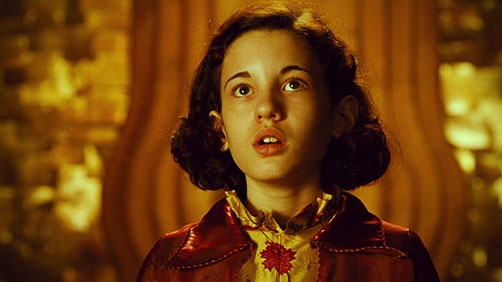 “You’re too old to be filling your head with such nonsense,” Carmen tells her daughter, Ofelia, in an early scene in Pan’s Labyrinth. “Such nonsense” is a book of fairy tales, cradled lovingly in Ofelia’s hands.

But are fairy tales nonsense? Should they be read only by the very young? Or can grown-ups learn from them, too?

For Guillermo de Toro, the answers are clearly No, No, and Yes, respectively. Pan’s Labyrinth is an R-rated tale full of fauns, faeries, and other fantastical creatures. It’s bloody and it’s dark. But it also has much to say.

A Long, Long Time Ago…

The story takes place in 1944 Spain, in the early years after the Spanish Civil War. 10-year-old Ofelia (Ivana Baquero) and her pregnant mother travel to the countryside to live with Captain Vidal (Sergi Lopez), a brutal man more concerned with hunting down rebels against the Francoist regime than he is with caring for his family.

Left to herself, Ofelia wanders into a mysterious labyrinth. There she meets the Faun (Hellboy‘s Doug Jones), an ancient creature with a head full of horns and a message for Ofelia: she is actually a princess who has forgotten her true home. To get back, she must complete three dangerous tasks. First, she must face a large and ravenous toad. Second, she must steal a magical dagger from the lair of the Pale Man (also played by Doug Jones). Third, she must use said dagger in accordance with the Faun’s instructions.

And so it begins.

A Tale of Two Worlds Part of the film’s brilliance lies in its masterful interweaving of the “real” with the “imaginary”. Rather than juxtapose a gorgeous fantasy with a terrifying reality, Del Toro parallels a terrifying reality with an equally terrifying fantasy. Ofelia’s wonderland — if it can even be called a wonderland — is desiccated and dark, and the ugliness she faces there often mirrors the ugliness she faces in the real world.

Del Toro is not (to my knowledge) a Christian, but Pan’s Labyrinth is replete with biblical imagery. We hear the story of a rose that grants eternal life, but which remains unsought because men are afraid of its thorns. We see redemption through the shedding of innocent blood, an act of sacrifice not entirely unlike Christ’s death on behalf of His people. We see the power and beauty of childlike faith in a depraved and cynical world.

Beyond these things, however, the film succeeds in showing two parallel realities. I’m sure some would argue that the world of fascist Spain is the “real” world, while the world of the labyrinth is only make-believe. Del Toro is deliberately unclear on the matter. I would contend that both worlds are real — and not only that, but the fantasy world is the more real of the two. An idea with distinctly Christian implications, wouldn’t you say?

Consider: in the “real” world we see violence, oppression, injustice, and all manner of depravity. It often seems that evil is gaining the upper hand, that good must finally expire beneath the overwhelming vileness of it all. But on another level, the transcendent level, we see that unseen forces are working to subvert and overthrow the evil. We see that even the actions of men like Vidal play a part in the Bigger Picture. Can you hear the echoes of Genesis 50:20? “As for you, you meant evil against me, but God meant it for good.”

A is for Art As I read up on the making of Pan’s Labyrinth, I learned that when the financiers bailed, Del Toro gave up his salary rather than abandon his project. That’s what I call dedication — and it’s apparent in every aspect of the film.

From the impeccable production design to Guillermo Navarro’s spellbinding cinematography, this movie oozes style and skill. We’re plunged into a world awash in chilly blues and stunning golds, encountering therein some of the most remarkable fantasy creatures of all time. Ivana Baquero’s performance as Ofelia is flawless. Had she failed to convince, the rest of the film would not have worked, but she excels in every way imaginable. And let’s not forget Javier Navarett’s score, a beautifully melancholic piece of work that adds yet more depth to an already deep film.

Not for the Faint of Heart

Pan’s Labyrinth is not an easy film to watch. It’s certainly not for everyone (least of all the squeamish). But for those who brave its dark waters, there is beauty waiting on the other side — and not merely aesthetic beauty, either. Movies like this remind us of the truth of Chesterton’s words: “Fairy tales are more than true; not because they tell us that dragons exist, but because they tell us that dragons can be beaten.”