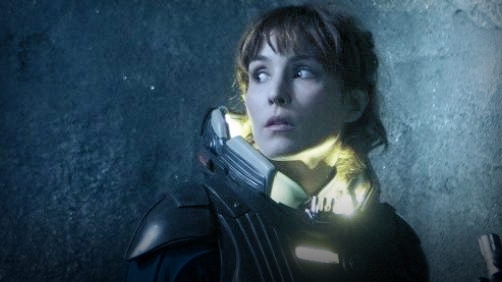 Ridley Scott. He gave us Blade Runner and he gave us Alien: two classics that still rank among the best that science fiction has to offer. Prometheus sees him returning to the genre — and while I’d love to call it a glorious return, I can’t. Scott’s latest work is tense and it’s entertaining, but it’s also something of a disappointment.

Where No Man Has Gone Before

In the year 2089, archaeologists Elizabeth Shaw (Noomi Rapace) and Charlie Holloway (Logan Marshall-Green) find pre-historic drawings on the walls of a cave in Scotland — drawings that match other drawings found on other continents. Taken together, the images suggest that ancient earth was visited by extraterrestrial beings. Could these beings hold the answer to the origins of mankind? Shaw believes so. “I think they want us to come and find them,” she says.

Four years later, and with funding from a dying tycoon named Peter Weyland (Guy Pearce), Shaw and Holloway climb aboard the exploratory spacecraft Prometheus and embark on a mission to meet their Maker.

But since when do missions go according to plan?

I was looking forward to this film. The trailers presented it as a sort of prequel to Alien, and I approached it in the hope that it would shed some light on the more mysterious aspects of that film. But it was not to be. In fact, I walked out of the theater with more questions than I originally had walking in.

That’s not to say I didn’t enjoy the movie, such as it was. It looks stunning — I wouldn’t be surprised if it walks away with an Oscar for Best Visual Effects — and the cast is first-rate. Speaking from a technical point of view, there’s little to gripe about. But technical wizardry doesn’t automatically equal good filmmaking. You have to have a good story, too. And that’s something which Prometheus sorely lacks.

Given the spectacular wealth of material at hand, what’s most surprising about the movie is just how un-spectacular it truly is. We’re treated to a few creative flourishes here and there, but Scott’s return to the Alien universe is, for the most part, uninspired. The narrative is clunky, and even by Hollywood standards, the characters do some remarkably stupid things. One minute they’re scared to death of an alien corpse; the next minute they’re discovering a new life form and trying to pet it. Since when was touching an unidentified and potentially deadly alien snake a good idea?

Exchanging the Truth of God for a Lie

Prometheus is about a search for the origins of life. It’s worth noting, however, that in all the talk of “finding the truth” and “meeting our creators”, the real truth and the real Creator are completely passed over. A question is asked and any answer is acceptable, so long as it’s not the one we find in Genesis 1:1. Panspermian theory is a viable way to account for man’s existence; the God of the Bible is not. And while the film may appear sympathetic to the Christian religion, it’s really not. Elizabeth wears, loses, and eventually regains a cross necklace, symbolizing her loss and recovery of Christian faith. But I say “Christian” with my tongue firmly planted in my cheek, because whatever faith Elizabeth allegedly has, it’s got little to do with the God of Scripture. She advises us to believe in something higher than ourselves; what that higher thing is, specifically, doesn’t seem to matter. Just believe.

Prometheus, at its core, is a film that revels in its own ambiguity. Some will think it’s pretty cool; others will walk away under the impression that they have seen something profound; and a very few will realize that beneath all the gob-smacking visuals and self-important storytelling, Prometheus is as empty as a discarded eggshell.

My opinion of the whole thing can be reduced to two sentences: Scott’s revival of the Alien franchise didn’t go so well. Let’s just hope he leaves Blade Runner alone.