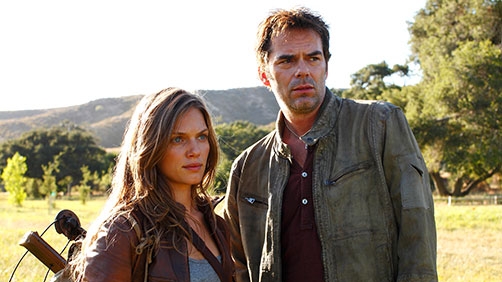 Take just one example that you might not necessarily think of: cars. Yes, you think of your cars running off of fossil fuel, but they generate electricity to the spark plug, which ignites the fuel. No spark, no ignition, no power. And that’s just one example.

In Revolution, in roughly our present day, something happened that caused electricity to cease to function. It cannot be generated. The show then takes place 15 years later where folks have pretty much settled in to a life of farming, hunting, gathering, whittling and the like.

But, as we soon find out, all is not good. The United States of America has pretty much crumbled and The Monroe Republic has risen up in its place which appears to be a brutal regime.

Captain Tom Neville shows up in the village of one of our main protagonists, Charlotte “Charlie” Matheson, looking for her father because General Monroe believes that he knows something about why the power does not work, and it does indeed appear that he does. Charlie’s brother, Danny, tries to defend his village and his father, in the chaos, the father, Ben, is killed and Captain Neville takes Danny instead.

Here is the crucial set up: Just as the soldiers were arriving in the village, Ben gave another one of our show’s main protagonists, Aaron Pittman, some sort of “amulet” (for lack of a better word) and tells him it’s important and to find a woman who knows something about all this. Then, as Ben is dying, he tells his daughter Charlie to find his brother Miles who can help her get Danny back.

We’re three episodes in and I’m pretty much hooked. It is a compelling plot line, especially in our day and age when everything we do revolves around electricity and electronic devices of some kind. Even those we might consider luddites cannot escape it. And so I think it may be a sort of fear in the back of all of our minds. That is one of the reasons why i think the show may be so compelling.

Of course a show is nothing without good characters and character development, which we are already seeing three episodes in. Charlie, though still a little annoying and naive, has already learned some valuable lessons and grown as a character. Miles seems tough on the outside, but we are already starting to learn some things about him, including his past as leader of the Monroe Militia. I’m believe he left it for a good reason, and since the militia has pretty much turned into a band of thugs and bad guys, I’m pretty sure the guy has a heart, which is why he left.

We’ve also seen some character development from Danny, who is a prisoner of, and traveling with, Captain Neville and the militia folks.

I admittedly have high expectations for this show. The executive producer is J.J. Abrams, who also is the executive producer of Fringe, of which I am a huge fan. He was also behind the now canceled Alcatraz which is frustrating because it was such a great show, and Lost which I never got into, but I hear it was really good for a while. So that, coupled with the awesome three episodes we have had thus far have given me very high expectations for this show. It’s a set up for disaster, me liking a show this much, as was proved with Alcatraz.

In our crazy reality TV culture, can a well conceptualized drama such as revolution survive? Time will tell but I’m hopeful, given that NBC just picked it up for a full season.