Taken 2: Please Take It Back — Review 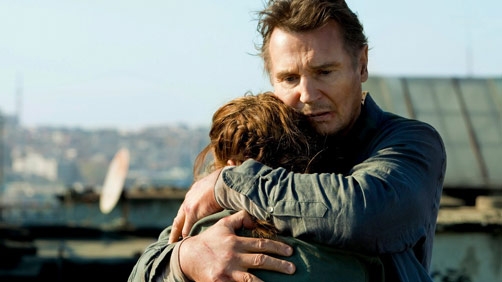 If I were introducing Taken 2 to a friend, I would ask him, “Have you seen the first one?”

“Yes,” he might answer blankly. Then there would be an awkward pause.

“Well,” I would beg the question, “What did you think of it?”

“It’s alright,” he might answer halfheartedly. I would promptly nod in approval.

Then I would tell him plainly, “Okay, then Taken 2 wouldn’t work for you.”

How did we end up with Taken 2?

Taken had a certain unexpected intriguing simplicity. It’s the unanticipated adventure of Brian Mills, a very unassuming father that’s faced with post-retirement drudgery. When he’s not preoccupied with odd security jobs he is depressed about the state of his family affairs and fretting over his daughter’s safety. He seems to be something of a looser at the outset. We all hope that we won’t end up like Brian, an all-work-and no-fun dad.

But from the ashes of his pitiful wasted life opportunities rise the red-hot embers of his professional expertise: his very unique set of skills that have 20+ years of refinement and commitment to the excellence of protecting the innocent and whooping bad guys. Before we get to the middle of act two in Taken, we all hope we would be just like Brian: risking our necks to rescue our loved ones no matter the cost, and showing our enemies that we’re totally boss — we courageous and passionate loving father types.

By the looks of Taken 2 it may have been a plan to repeat the experience we had with Taken. It serves the same song, second verse — no, more specifically it is the encore of Taken.

Brian Mills indignant wife and daughter now deeply appreciate the man they once abandoned. It seems Lenore, his ex-wife, is starting to grasp what she lost when she dumped Brian. This sounds good in writing, but it couldn’t have been more forced in Taken 2 — as though I saw the puppet strings of the directer looming over the characters as they delivered their unbelievable story development throughout the first act. But just when all things are looking merrier for the misfit Mills, the very unexpected and stupid happens. Albanian bad guys have devious plans to destroy Brian and his estranged family. It seems there is honor and “family” among traffickers. They loved the ones they lost to Brian’s hand. Yeah, you might remember them as the scumbags in the first film that Brian whupped to save his daughter. Apparently they were really just misunderstood familymen when they were not trafficking women.

You might recall that the bad guys of Taken were traffickers. Yes, I already noted that it means they sold women. But more specifically, they ran/run a business of kidnapping tourists and selling them for sex. Anyone in their right mind understands Brian’s effort to seek vengeance and save his daughter. On the other hand, who really empathizes with the Albanian dirtbags that have enough “honor” among them to seek revenge? If I interpretted the narative correctly, Taken 2 attempts to help the audience understand and relate to the bad guys’ interests. Murad Krasniqi, Brian’s main enemy, is more than maniacal: he’s an idiot if he thinks 1) he is serving justice and 2) he thinks it’s a good idea to go after Brian Mills again (aka Liam Neeson [aka Batman’s and Obi-Wan Kenobi’s mentor, a god in two fantasies, and a guy who punches wolves]).

Was Taken 2 all that much different from Taken?

Both films have similar problems that I have observed: Maggie Grace who plays Kim is too old for her character (and it shows all the time), locations are inaccurate for an otherwise realistic modern setting, the people in foreign countries are poorly stereotyped, and much of the cinematography is average at best and mostly uninteresting.

Taken 2’s shortcomings run much deeper. The cinematography is mostly amateurish, using a lot of quick cuts that I think are disorienting and tell you little about the fights that looked choreographed when they weren’t choppy. Kim starts out as a learning driver that’s failed her drivers tests, but in the middle of the movie, without further training, she spontaneously gets good under pressure with a stick and stunt maneuvers in the narrow and overly-populated streets of Istanbul.

There are long and drawn out scenes of action progressing at a clunky pace. The suspense and intensity of Taken is not present. And when it was all said and done I instantly thought to myself as the credits rolled, That’s it?! There should be at least another 20 minutes of story leading up to a real climax! I genuinely felt cheated by the ending that had little in common with the suspense and tension at the end of the first Taken.

Is there hope for Taken 3?

Since Taken 2 made back it’s budget and then some at such a rapid pace, it’s already been announced that another sequel is in the making. Liam Neeson has expressed his skepticism for furthering the story. I too want to note that it’s just bad parenting and contradictory to Brian’s “unique set of skills” if he is caught off guard by yet a third kidnapping. And it’s bad taste of the filmmakers if the bad guys are the same Albanians. Hasn’t Brian Mills already killed all of their traffickers? When will the Albanians ever learn to leave Brian alone?

If Taken 2 is any sign, Taken 3 will just let down the fans of the original Taken even further.