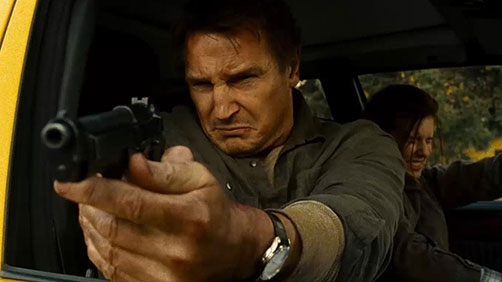 Have you ever watched an action movie and thought to yourself, “you know, I like the action, but what it really needs is about 20 times more camera angles so I’m not entirely certain what I just saw — that would be great.” If so, then you are in luck! If, however, like the vast majority of functioning humans, you actually like to see the things you are looking at, Taken 2might not be the film for you.

Taken 2 is a shallow, kinetic mess of visual trickery that never, ever stops, even when it should. Like a twitchy kid with ADD and an alarming coffee addiction, Director Olivier Megaton can’t seem to keep his hands off a single shot.

There is never a second where you can just enjoy the action. Some of the best action moments are actually lost in a strobe light-like series of cuts. To give you a better example, at one point during a fist fight a character pulls a knife, but the camera never cuts back far enough, or lingers long enough, to identify who it is holding the knife. A long shot eventually reveals it, but that is just muddy filmmaking.

Fair criticism for sure. Joseph is working on the official MovieByte review for Taken 2, but if I were reviewing it, I would give it three stars, but just barely. The original, on the other hand, I would easily, readily give three and a half stars, possibly four. This film was, in some ways, a disappointment after the first edition of Taken.

I did disagree with this though:

Most adrenaline fueled films aren’t well served by getting lost in heavy drama, but the risk is that you need to do a very good job with developing the minimalist script or it feels hollow. You don’t need a massive backstory on the villain, but you do need to care at least a little, otherwise the resolution is anti-climactic.

I disagree with this so much. When done well, drama only serves to lift the story to another level. What I think Ryan is balking at here is that with some of these action films it is generally not done well. What we need is better, more well done drama, not a lack of it.