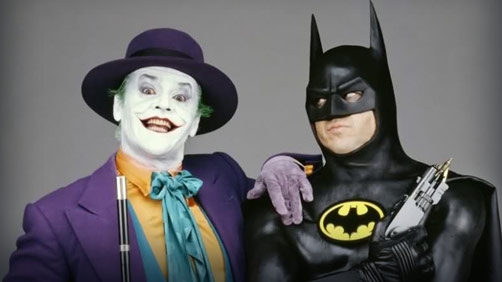 Tim Burton’s Batman is a strange animal: too dark to be enjoyed as pure camp, and too absurd to be viewed as serious entertainment.

Discarding the outright goofiness of 1960s TV series, Burton takes a grimmer, gloomier approach to the Batman mythos. The result is both fantastically stylish and frustratingly hollow: a celebration of style over substance that dazzles the eye without ever engaging the mind or heart.

Batman won an Oscar for Art Direction & Set Decoration, and it’s not hard to see why. The elaborate gothic-industrial design of Gotham City is slick and atmospheric — one of the most striking places I’ve seen at the movies in a long time. Batman’s flaws are many, but lack of visual appeal is not among them.

Equally striking is Jack Nicholson as the Joker. His take on Batman’s arch enemy is classy, deranged, and yet undeniably humorous. He has fun with the character, and we have fun watching him. Nothing can touch Heath Ledger’s performance in The Dark Knight, but Nicholson’s work is formidable in its own right.

The musical score, written by Burton’s go-to composer, Danny Elfman, is exciting and dramatic, and the main theme is arguably one of the Elfman’s most memorable pieces. The four-note minor key ascent and two-note major key descent is simple but effective, and once you’ve heard it, it’s impossible to forget.

Remembering the movie, I find that the visuals remain strong in my mind, but I have trouble caring about what happened in front of them. I remember an astonishing special effects shot that travels up, up to the penthouse of a towering, ugly skyscraper, and I remember the armor slamming shut on the Batmobile as if it were a high tech armadillo. I remember The Joker grinning beneath a hideous giant balloon as he dispenses free cash in his own travesty of the Macy’s parade, and I remember a really vile scene in which he defaces art masterpieces in the local museum before Batman crashes in through the skylight.

But did I care about the relationship between these two caricatures? Did either one have the depth of even a comic book character? Not really.

What Batman has in style, it sorely lacks in dramatic and thematic depth. Suspense is in short supply, excitement is fleeting, and bold, charismatic storytelling has gone AWOL. As a visual effects extravaganza, this movie is fun and entertaining. But as a Batman movie, it’s not just disappointing. It’s downright pathetic.

Let’s start with the casting. Kim Basinger as Vicky Vale? Just… why? Not only is she a less than stellar actress, but her character is largely superfluous — a token love interest whose “romance” with Bruce Wayne is so poorly presented as to be laughable. Most disappointing is her lack of emotion when she discovers Wayne’s alter ego. Hello? You just found out that your boyfriend is really a masked vigilante who runs around in a bat costume beating up thugs with his bare hands. Is a glassy-eyed stare the best you can do?

Michael Gough as Alfred is also miscast. He’s too old, too feeble, too grandfatherly; a dithering old man with none of the toughness you’d expect of such a character. He also seems bent on ruining Wayne’s secret identity by playing matchmaker… but that’s another issue altogether. What about Michael Keaton? He’s a likable actor, but his performance as Bruce Wayne is stiff and forgettable; his performance as Batman even more so. He lacks the intimidating physical presence for such a role — a problem made even more obvious when he dons the batsuit. It’s hard to take that inflexible rubber costume seriously, much less the man inside it. When Batman knocks out a bad guy with one blow, Indiana Jones-style, it’s not because he’s such a terribly fearsome fighter: it’s because he can’t afford to miss the first time.

And this guy is supposed to strike fear into the heart of Gotham’s underworld? Pardon me while I laugh aloud with the Joker.

The action scenes suffer from clumsy choreography and an even clumsier hero. Batman can hardly turn his head, and his attempts at slugging it out with the baddies are even more inept. What kind of film is this, we must ask, where a random street thug manages to kick Batman around for several minutes as if he were nothing more than your average Joe Blow?

Like many superhero films, Batman is an origins story. The odd thing is that Burton seems more concerned with the origins of the Joker than he does with the origins of Batman himself. We see the murder of Bruce Wayne’s parents, but beyond that, little history is explored with regard to how Batman became Batman. And if the film doesn’t really care about him, why should we?

Next to Nicholson’s Joker, Batman is as bland as a bowl of grits. If we cheer for him, it’s only because we know we’re supposed to. After all, he’s the hero. But given the opportunity to delve into the Dark Knight’s psyche, to show us what makes him tick, Burton showers all his love and attention on the villain. If there were any honesty in Hollywood titling, this film would’ve been called Joker instead of Batman.

I haven’t even discussed the scenes where Joker and his henchmen dance to the music of Prince. To be honest, I’d rather not. But rest assured it’s every bit as awful as it sounds.

I respect Burton’s Batman the same way I respect Raimi’s Spider-Man, in that they both helped resurrect interest in an iconic comic book character. I also appreciate the film’s artistic merits. But Burton’s missteps with the story and character are difficult to overlook; and the more I think about them, the more grievous they appear.

These missteps are even harder to forgive when you consider how much better the Batman mythos has been handled by Christopher Nolan in his recently concluded The Dark Knight Trilogy. From the casting, to the writing, to the storytelling, Batman Begins is the movie Batman should have been: an epic superhero origins story with real brains, real brawn, and a heart to match.

Sorry Burton, Nolan’s Batman could kick your Batman into next week without even breaking a sweat.