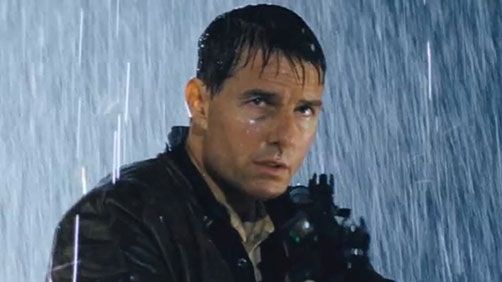 Hollywood continued to rejigger its publicity plans for holiday releases Monday in the wake of the school shooting in Newtown, Conn.

Paramount has decided to make several tweaks to the marketing materials for Jack Reacher, the gritty crime-action pic starring Tom Cruise as a hard-boiled former military cop trying to prove that an alleged sniper was framed. The film opens Friday.

The studio wouldn’t officially say what the changes are, but a source confirmed that a scene of Cruise’s character firing off a semi-automatic weapon is being cut from promotional spots.

And then regarding Django Unchained:

At a junket for Django on Saturday in New York, Tarantino said he is weary of defending the violence in his movies.

“I just think there’s violence in the world. Tragedies happen,” the filmmaker said. “[Django} is a Western. Give me a break.”

Foxx, however, said Hollywood can’t “ignore” that violence in movies has an impact. And this summer, Harvey Weinstein, an advocate for gun control, called for a summit on violence in film after the Aurora theater shooting during a midnight screening of The Dark Knight Rises.

Look, okay… I thought it was classy of Paramount to push back the red carpet premiere of Jack Reacher in light of the shooting. But let’s not get carried away. The pushing back of the premiere was more a move out of respect for the tragedy, to recognize that something awful has happened and we might collectively need a moment.

But this garbage is just reactionary silliness. We don’t need a “summit on gun violence in film” or whatever. Too many people, conservatives and liberals, are using this tragedy as a platform to advance their agenda and it’s really sickening to me. Why would we need a summit on gun violence when the public is free to see films or not as they choose? Unless we are saying that we need to have some sort of governmental (or other) control over what the people see and hear. That sounds suspiciously like communism to me though.