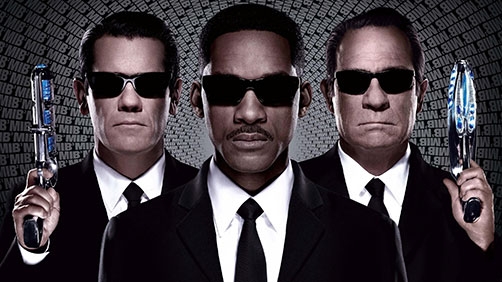 In a world — a humorous world — where aliens not only exist, but many of them live on earth, someone needs to police and monitor their activity, someone has to keep us safe, someone has to watch over us. That is the job of the Men in Black.

Having enjoyed Men in Black and Men in Black 2 quite a lot, I looked forward with great anticipation to Men in Black 3 (henceforth referred to as MIB 3). Unfortunately I was never able to catch it in the theater. So I was happy to catch it via iTunes rental this past weekend.

MIB 3 had, as far as I’m concerned, some pretty big shoes to fill. No the first two films are not Shakespeare. They are to me, just good, clean, hilarity, fun, and pure awesome. And this fictional world is not just about comedy, there’s actually some good drama sprinkled in there. Non-sensical to be sure, but good. For me, a good comedy film is also one with a good plot. And that is what made the first two films special to me.

So I wondered, could a third film so long after the first two live up to the standards? I was exceedingly surprised by the end of the film just how well it worked. I was skeptical going in just how well it was going to work. After all, the chemistry of character was based on Will Smith and Tommy Lee Jones, and here we are with a plot that proposes Agent J (Will Smith) go back in time to save a much younger Agent K (Tommy Lee Jones), played by a different actor. So right away it seemed to me there were two factors working against us — missing J/K chemistry, time travel plot.

And yet it worked so well I was stunned. By the end, for a not serious film played for comedy, the degree to which the plot works, and works within the context of the previous two films is really quite a feat. At the same time that I say I was surprised at how well it worked, I must say that keeping Tommy Lee Jones out of most of the film seems like a startlingly stupid strategic mistake. Why would you remove one of the primary actors, from a pair of actors that had such great chemistry together? It just doesn’t make a lot of sense. And I wanted more Tommy Lee Jones. He’s a fantastic actor, and though there was still agent J/agent K chemistry between Will Smith and Josh Brolin (Young Agent K), it was not the same as the Will Smith/Tommy Lee Jones chemistry. It was a little disappointing.

As I sat down to watch this film, I began to prepare myself for a couple hours of drudgery based on the slowness with which this film got started. Beyond the initial prison escape on the moon of the primary antagonist, we spent far too much time exploring the old man anger Agent K seems to have developed. I am usually never one to ask for more action and less story exposition in a film, but I certainly wanted things to move along a little faster in the first act of this film.

As pleased overall with this film as I finally ended up being, I still think the first act needed a lot more work.

As well as this plot worked, it does seem that time travel is a bit overdone in sci-fi films lately and frankly, I am ready to move on to other plot devices now, thanks.

And yes, I know it’s a comedy and not to be taken too seriously, but the way time-travel worked at the end of the film with Agent J purposefully taking the risk and getting shot by Boris the Animal so that he could activate his time device and go back just a few minutes before, now with the knowledge of exactly when and how Boris would shoot at him was just non-sensical based on the way time-travel worked with the rest of the film. Where was the agent J of a few minutes ago? It was non-sensical and didn’t work.

I know it’s silly to quibble about this with such a non-serious film, but frankly it could have been handled better.

That said, this film was a lot of fun, and I would put it on the same level as the previous two films. It’s well worth the fun and laughs, and even a couple of dramatic and tender moments. And it’s a relatively clean film so it definitely has that going for it. I give it a thumbs up and will be interested to see if they make more.