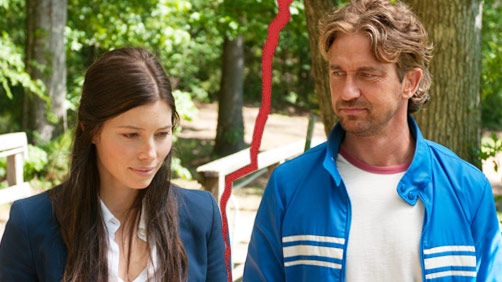 Witless, unfocused, and arguably misogynistic as well as misandristic, Playing for Keeps is a dispiriting, lowest-common-denominator Hollywood rom-com.

It’s a wonder why decent actors get paired with fatuous productions, such as this one. If you care to know more about how poorly the film sells itself, then partake in the rest of my review.

I saw Ron’s comment on YouTube for the official release of Playing for Keeps’ trailer. And I want to parrot Ron. Hollywood, what were you thinking? Get it together.

Playing for Keeps is a decent concept — like most romantic comedies are, actually. Performances from the all-celebrity cast were somewhat surprisingly engaging too. Where Keeps epically fails is in the misguided plot. It seems that rather than taking the high road and delivering a romance akin to Love Actually, Keeps is a showcase of comedic talent put to a third grader’s movie script. The film’s story revolves around a child that is not especially compelling, so one has to wonder why so much of the film focuses on said child. George (played by Gerard Butler) is an estranged father to Lewis (played by Noah Lomax). Since George’s wife Stacie (played by Jessica Biel) walked out on him for his looser-ly behavior at the height of his soccer career, Lewis has grown up lonely without his father. Sure, Stacie has a fiancé, Matt, but how can Matt possibly live up to the manly-father-figure-in-the-rough that should be George?

The whole of the movie makes it clear George is a reformed man now. Little by little, dirty-minded soccer moms (Judy Greer, Catherine Zeta-Jones, and Uma Thurmon) want to ensnare him, but George sticks to some idea of morals — most of the time — so that he can concentrate on what’s really important: winning the affection of his son and ex-wife. It seems that no love relationship George has ever known lived up to his with Stacie. What George passionately wants is for Stacie to return to him. [All the women should wipe the tears from their cheeks before they read on.]

If Playing for Keeps were to excel, we would need to have a likable kid to play Lewis. To be fair, Noah’s acting ability is okay, so perhaps it’s the direction that sells him short. One moment, Lewis is a smart and precocious little boy that wants to be just like his father, but then the next moment he’s a mushy 4-year-old-like mommy’s boy that is crayoning Stacie silly doodles of their broken family. I think the writer (Robbie Fox) and director (Gabriele Muccino) missed several beats in here somewhere. I don’t know if Lewis is just plain childish or if he’s the gem that George really approves of and respects.

My point in sharing with you this awkward collection of plot and character analysis is to demonstrate the confusion my wife, Liz, and I experienced watching Playing for Keeps. Liz has an open mind and likes a good chick flick as much as the next chick. As she put it, the filmmakers must have struggled to make up their minds as to the point of the movie. In the end, Keeps expresses an unlikable and cliché theme of “always let your heart be your guide.” It is self contradicting in view of the fact that Stacie and George are lead back to each other with different paradigms.

Stacie is a problem for the plot too. As the smart ex that must have left George for obvious reasons, she should also be smart enough to know her heart and mind when George makes a comeback. But rather than be the consistent female lead that knew her mind about George’s negative behavior in times past, Stacie is now uncertain and dumbfounded by George’s current display of maturity. Like an unlikable person, Stacie tells you what she wants in a man, but when she gets it, she hypocritically shies away from it for very little reason (i.e. the mundane and expendable fiancé, Matt). The film itself is not playing for keeps very effectively.

Hollywood, you want to run that one by me again? In about 20 years? With better direction? Thanks.