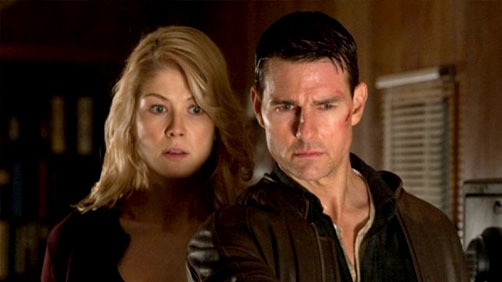 Jack Reacher is an above-average crime thriller with an effortlessly beguiling performance from Tom Cruise. At times it lacks compelling motivation, or sophisticated action, but for what it lacks it aims to replace with a good helping of drama, mystery, and a high body count.

An innocent-looking brute with a sniper rifle perches himself high up on a parking deck. It’s the middle of the day, and he’s either going to shoot pigeons in the park, or he’s out to murder a few pedestrians on the other side of the river. Sure enough, he starts killing what appears to be a random collection of five people, each with one-shot kills.1

Police of this all-American city catch the supposed shooter in no time. The suspect is a retired army sniper, identified as “Barr.” It’s an open and shut case. The cops have plenty evidence to prove this ex-sniper is their murderer. But without sufficient motive, they are interrogating the above-average suspect in hopes he will make a blunt confession to end the suspense. To the contrary, Barr scribbles on a sheet of college-lined notebook paper “FIND JACK REACHER.”2 Investigator Emerson (David Oyelowo) does some digging, and learns that Jack is practically impossible to track down.

Jack Reacher walks into police headquarters a moment later, much to the surprise of the D.A. (Richard Jenkins) and Emerson. It seems Jack is interested in the case all on his own. He is certain that it’s an open-and-shut case as well. Barr is not an innocent man… but the D.A.’s daughter, Helen (Rosamund Pike), is assigned to Barr’s case. Helen convinces Jack to participate in her own investigation of the shooting by the river.

Top Secret Spoilers Start ~ Jack unravels a crazy-strange villain’s plot to kill people to make a lot of money for a powerful overseas monopoly.3 It would seem corporate fraud is worth killing a few Americans along the way, but it sure won’t be if Jack Reacher gets involved. ~ Top Secret Spoilers Stop

Jack becomes fast friends with Helen and racks up all sorts of enemies. In Reacher there is the occasional smart spat of dialogue, clever action trick, or creepy dude doing despicable things. Jack is incriminated at every turn, but somehow manages to out-smart or out-punch anyone. And, at times, the tragedies along the way tug at the heart strings.

Reacher is a decent breeding of suspenseful thriller and drama with a pinch of action. Ultimately, a movie like this one makes me curious about the source material. Jack Reacher is a fun character, if you can see passed the same-old-same-old Tom Cruise. Since I heard the author of the novelization, Lee Child, in an interview say that the film is based after the ninth novel in the Reacher series, I’m thinking about giving it a read on my iPad. Fans say that the books are more than alright. Jack Reacher is mostly entertaining and fun to watch. Reacher as an action hero is a gifted investigator, mathematical, a risk-taker, 100% vigilant, a rogue, and amusingly empathetic. I can see that his character is a good foundation for suspenseful thrillers.

Cracks in the Foundation

In the first of the Reacher novels, Killing Floor, it is revealed that he has a love for music, especially blues. It was this affinity for the blues that inspired Reacher to get off the bus at the start of Killing Floor and catapulted him into the resulting story. It is also in this novel that Reacher’s internal monologue reveals Jack has a music collection in his head, which he listens to at will.

It’s details like these that make for a personable leading character. This movie misses the opportunity to make Jack a more-or-less originalistic person. Instead, Jack is embodied by the ever present Tom Cruise (aka Ethan Hunt). I like Tom/Ethan, but he didn’t belong in the Jack Reacher series, IMHO. Jack and Ethan as characters have little in common when you compare the source materials side-by-side.

Either Tom should’ve rose to the challenge and delivered a more iconic character than he’s known for, or Jack should’ve been played by, say, Chris Hemsworth. He would’ve been a perfect Reacher. But alas, Chris is still playing younger characters. He would work remarkably well if he could pull off a slightly thirty-something-year-old.

Anyway, other disappointments are the supporting performances. Lets face it: this movie is fun, and the plot is interesting, but the heavy dialogue minutia and corny acting from the majority of the cast is dampening a dynamite story. Rosamund Pike is a good actress, but here she comes across as soap opera material.4 The Zec (Werner Herzog) as the archenemy is a fascinating character for what little he gets to participate in the film. But I have to agree with Catherine Reitman: most of the time, The Zec is a misplaced, malevolent geezer on set that stumbles into scenes then backs off to let other characters in the scene carry it.

Jack Reacher is not quite right. The film should’ve been more like the source material to maintain the audience’s interest in Reacher as a person. Tom Cruise is overdone, basically reprising the role of Ethan Hunt in most every film he is in. More Jack from the novel would’ve helped.

The story has its moments, but it suffers from lukewarm action sequences, a cumbersome investigation, and a dull nemesis. Catch this film when it’s available for home entertainment if you “just gotta” see everything Tom Cruise.