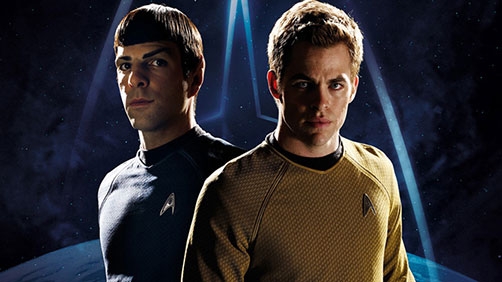 One of the fun things we got with the IMAX showings of The Hobbit this past weekend was the first 9 minutes of Star Trek Into Darkness. This 9 minutes will not be made available online, or even in standard theater screenings of The Hobbit, it is exclusive to IMAX.

You should be aware that if you have not seen it, there will be spoilers.

The prologue kicks off with the familiar sounds at the beginning of Star Trek (2009) which are very reminiscent of the original series’ bridge sounds. But instead of resolving into a Starship bridge as with the previous film, it resolves to an alarm clock. We are in London, and the stardate is 2259.55 (in the new Stardate format first seen in the previous movie, this is February of 2259). This also indicates that it has been a year or so since the events of the 2009 Star Trek film.

We see a couple taking a futuristic car to a hospital with plenty of futury touches like floating gurneys and the like. And we see that this couple are visiting their very sick girl. Though there is no dialog as of yet, the scene is heartbreaking, as aided by Michael Giacchino‘s score.

As the father steps out on a balcony, an ominous voice from the background says to him, “I can save her.” Upon turning, we see the film’s much publicized villain, played by Benedict Cumberbatch. And just as all of us Trekkies have been asking for some time, the father asks, “who are you?”

As the scene cuts, onscreen text announces to us that we are on a Class M planet called Nibiru. As we zoom down into alien looking vegetation, two figures appear running. It is Captain Kirk and Dr. McCoy. They are running from the natives, who are chalky white with tattooing.

We soon here the familiar chirp of a Star Trek communicator (another nice touch for Star Trek fans), and Kirk and Spock are having a dialog about preventing a volcano from erupting on this planet and destroying all these wonderful aliens. The conversation is punctuated with Sulu screaming about how bad things are getting and how he’s not going to be able to keep the shuttle going for much longer.

Apparently, the only way to stop this volcano is with a shuttlecraft inside this volcano, to drop Spock in to deploy the “super ice cube” (Kirk’s words). Also, the Prime Directive is in full swing and they aren’t supposed to be letting any aliens actually see them.

Sulu finally concludes he can’t keep the shuttle going so he starts to ascend. Then Spock does something mind-numbingly stupid: he cuts his tether to the shuttle upon which he is hanging in the volcano.

Meanwhile Kirk and McCoy are running like crazy. So crazy in fact, they jump over a cliff and into the water. That may seem crazy, but what is even crazier is that as they dive underwater, the U.S.S. Enterprise is revealed to be hiding there. Kirk and McCoy swim right in.

And now the mission is to save Spock from the Volcano. Problem is, apparently all that crazy transporter action we saw in the previous movie doesn’t work anymore — all that beaming back and forth from Titan to Earth, beaming at warp speed, beaming someone falling at a very alarming speed in mid air — that’s no good here and we’re back to the way transporters used to work in Star Trek, which means they are subject to all sort of limitations, interference from a volcano for instance.

Scotty insists he can make the transporter work if he has line of sight, but Spock insists that Kirk can’t do that, it would be a violation of the Prime Directive because the natives would see the ship.

This nine minute preview ends with Kirk asking McCoy what Spock would do if the situation was reversed. McCoy states that “he would let you die to protect the Prime Directive.”

So what have we learned? Not a whole lot actually. But there are some things to glean here.

Though in the real world, four years have passed since we last saw this brave new/old crew, only one year has passed in the Star Trek universe. This means James Kirk is still relatively green as a Starfleet captain (and don’t forget that he went from cadet to captain in about 3 years time, don’t even get me started on the utter ludicrousness of that plot device from the previous film). It is likely that he has not yet established the full trust and rapport that we have always seen previous to the 2009 Star Trek film.

It is likely and implied that there would be a cost associated with John Harrison’s (Benedict Cumberbatch) offer to the father of the sick daughter. What that price may be, what his plan is, what makes him so sinister and such a threat, is still a mystery.

Though JJ Abrams style is still quite visible, it seems more tolerable in this nine minute preview than the last film was, but perhaps that’s because my expectations were so low. Though good in many ways, in many others, the cinematography of the previous film was quite deplorable, and I am hopeful after this preview that JJ has toned it down.

As I alluded to, the transporter things bugs me a bit. They did all sorts of things with the transporters in the previous film that I was not at all happy with as a Trek fan. Beaming to a ship really far away at warp speed? Why do we even need ships to travel? Maybe they are trying to bring the rules of transporters back into play?

While I didn’t think much about it in the moment, I have become increasingly disturbed about having the Enterprise hiding underwater. Wouldn’t that ship be generating a lot of heat, and shouldn’t there be huge billowing steam clouds rising from where the Enterprise is hiding? Why couldn’t they have just stayed in orbit?

3D is still gimmicky and I have no intention of seeing this film in 3D when it comes out. It does nothing for the story.

Despite any complaints I had, this preview left me wanting a lot more. I had quite forgotten I was watching a preview and was really getting into it as a film, and then it was over. So mission accomplished boys, I’m in. Let’s do this! Oh, drat, it’s still like over five months away.

P.S. If you didn’t and/or can’t catch the IMAX showing of The Hobbit, where you can see this awesome preview, at least be consoled that trailer #2 is now online, which I have embedded for your viewing pleasure.