Superman in Cuffs is Promising 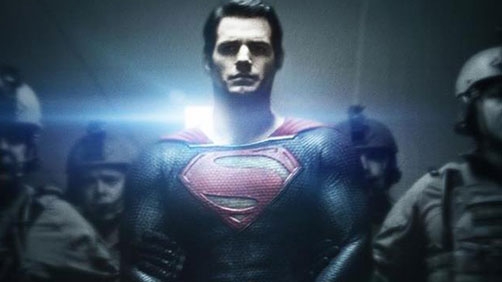 That Man of Steel is being exec produced by Chris Nolan should be a point in its favor, but after The Dark Knight Rises, in which we’re expected to believe the same government that secretly assassinated Osama Bin Laden in Pakistan can’t handle an ostentatious blowhard taking over an American city, I can’t help but fear for the grim, poorly plotted future in store for Superman.

Man of Steel‘s marketing hasn’t helped. The first teaser came off like the last five minutes of every episode of The Incredible Hulk*, the only thing missing being sad piano music to really nail down the emo superhero mood, and the posters have been as dull as Lex Luthor’s scalp after a busy day plotting world conquest.

But hang on, look, up in the sky! It’s a new poster, and it’s actually interesting. Superman, handcuffed and flanked by soldiers, appears on his way to the big house, and for the first time I’m suddenly intrigued by this thing.

I can’t say I agree with the assessment of the first teaser and the marketing. I’ve been intrigued from the beginning. But I also admit that the “Superman in Cuffs” poster is by far the most intriguing thing I’ve seen yet and I’m excited to see the full trailer in theater in front of ‘The Hobbit’ soon!