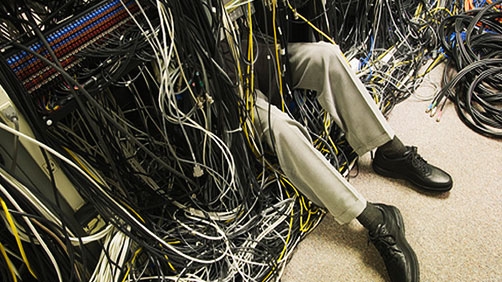 Forgive me as I indulge myself in some explanation for why we suddenly went silent for over 24 hours. And please, upfront, accept my apologies, we’ll try not to let it happen again.

If you are geek or nerd, you may want to know what happened. Here is the short version. MovieByte’s server environment has always been somewhat challenging. We are hosted on the same server with several other sites owned by the parent company, Liberty Alliance, which utilizes Varnish cacheing, and load balancing across several actual servers. I’ve never worked with a site in this environment before and I’ve spent a lot of time trying to make the CMS run properly in the environment. In a grand attempt to squash the last of the outstanding bugs, I pushed out some code changes, as well as some updates to the core CMS and several add-ons.

Turns out, one of those add-ons was broken in a very bad way. The tech support for this add-on looked into the issue for several hours yesterday and couldn’t figure it out. In the mean time, I didn’t want to post anything because the possibility was high that I would need to roll back the database to a known good state. Trust me, I spent most of the day pulling my hair out and wringing my hands. Finally, rolling the database back to a known good state is precisely what I did about 20 minutes ago.

The good news for me is I think I have worked out a lot of kinks and quirks in the CMS and I’m not planning on updating anything ever, EVER again (you can see it now, the year is 2032, the site is still running on ExpressionEngine 2.5.2, ancient and outdated, but still running).

In any event, sorry for the lack of material yesterday. Now, back to cool stuff!