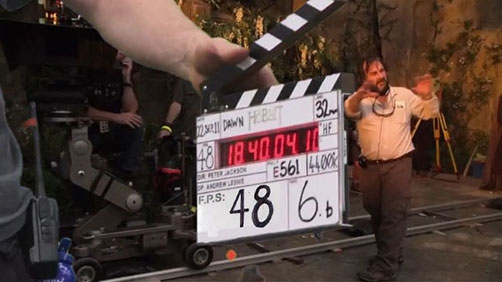 One colleague couldn’t believe how poor the 48 fps presentation looked, insisting - or hoping, more like it - that something must have been wrong with the projection. Jackson’s big, game-changing crusade for a frame rate that would part the heavens and open humankind’s hearts and minds and brains to a new way of watching film couldn’t possibly look so unpleasant. Could it?

I have made my feelings of abhorrence for the idea of any film at 48 FPS pretty well known. But I will admit even I have been getting caught up in the trailers, images, featurettes and excitement of the upcoming film. After all, I loved The Lord of the Rings trilogy.

Nevertheless, the reviews and rumblings coming out of the early screenings are confirming my fears. 24 FPS has a very pleasing, time honored look to it. Clarity and crispness isn’t everything, and if you think it is, you have missed the nuance of what cinema is.

Part of the problem is there’s too much detail in every frame that the magical filter of cinema that makes most 24 fps film so pleasing to the eye is gone; every prop on a set too clear, and even a performance by someone like the very fine Ian McKellen looks embarrassingly, unnaturally theatrical. Moving images, especially walking Hobbits and dwarves - not as much the CG creatures, for what it’s worth - flit at odd speeds that just never look right.

Right, aside from the lack of pleasing motion blur that is by definition not present at this higher frame rate, there is going to be quite a bit of detail — so much so that it doesn’t look more real, it looks fake, or surreal, but not surreal in a good way.

Personally, I fully intend to see the film at 24 FPS, in fact I’m not even sure it’s showing at 48 anywhere around Nashville. If it is, maybe I’ll see it in 48 later so I can comment on it. But I feel the same way about this as I do about 3D, only worse. It’s a gimmick, and it’s a cinema destroying advancement.