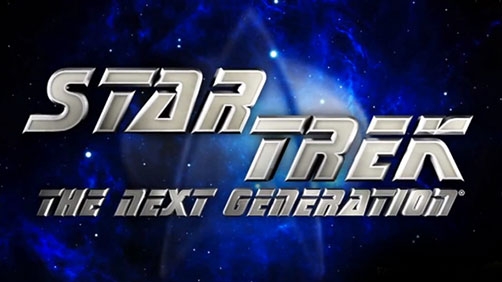 Nothing has warmed this nerd’s heart in the last couple of months quite as much as the Star Trek: The Next Generation, Season 2 Theater Event. It was with much glee and enjoyment that I sat in the theater this past Thursday night and watched the Enterprise D and her crew soar around the cosmos in HD.

First up was a behind the scenes look at the remastering process. To sum up, it’s a long and tedious process. This is not quite the same as remastering Star Trek: The Original Series (TOS) in HD. It’s sort of funny how things work out, but even though the technology used in the filming of Star Trek: The Next Generation (TNG), the effects work, and everything else was leagues beyond what was done in TOS, it’s actually harder to remaster in HD because the final editing, and many of the digital effects and final composites were done in standard definition video. Many elements just don’t exist on film, and the final edits certainly don’t. Where with TOS, the edits were on film and that could simply be scanned in digitally and the new effects shots mastered in over that, with TNG, the original dailies must be rescanned, the edits recreated, model shots recomposited, old digital effects redone. It’s a lot more work. Often times, footage that they need for, say, Season 2, has been stored in the archive boxes with Season 6 or something because they reused some clip or effect shot, or some piece of footage, then put it in storage with that episode, instead of the original episode.

And then someone has to go through all that archive footage, all the dailies, all the boxes.

One of the great things about this process is that those involved are keeping it true to the original intent wherever possible. They aren’t making any unnecessary changes. If an effect, or a planet, or a ship, or a phaser beam, or anything must be recreated for HD, they keep it as true to the original as possible. And wherever possible, all original model work is being used, not being replaced with CGI.

I think I’ve delved into slightly more territory than was covered by this behind the scenes clip, but I can’t help it. It was fun. We were then treated to seeing the well renowned episode, Q Who? remastered in HD. And it was truly glorious. True fans like myself should be very pleased. The episode is exactly as we remember it, save that it looked crystal clear, the color tones were right, the contrast was improved, and it sounded great! Us fans know that the first couple of seasons were not looking so great for their DVD transfers, and the colors and hue have always been a bit wonky. It looked absolutely stunning.

In terms of comparison to a TV show of today, it did move a bit slowly. It’s funny how this is such a well known episode that introduced us to the Borg, who would go on to be one of the most infamous villains in Star Trek, and yet I doubt many would say that it held up very well by today’s standards. There wasn’t actually a ton of action. Picard’s stalling and hemming and hawing would be taken as a sever sign of weakness in a captain, and the battle scenes just weren’t that exciting.

That said, I am still thrilled with this episode. Though it’s obvious that the concept of the Borg is not fully fleshed out yet, in the hands of lesser men (cough George Lucas cough), I’m sure there would have been temptation to digitally retrofit this episode to make the Borg appear more like they do later, and perhaps to spice the outer ship action up a bit at least, if not other story enhancements to spice it up. But this episode is left as we remember it, and despite everything I mentioned, it still works for me, and it is so much better than a lot of cruft on TV these days.

We were then treated to a sample of the blooper reels which will be available on the Season 2 Blu-ray, which was actually quite hilarious — it is obvious they had a lot of fun filming the show.

After which we were treated to a 25 year cast reunion in which all the principle actors were put together on a set and talked Star Trek. One thing that sticks out to me is that the cast is delightful and shares a dynamic together even when they aren’t acting and being their characters from the show. This is so refreshing, and quite a change from the squabbles and non-sense from the cast of TOS. The original series cast can be just downright painful and laughable, admittedly mostly because of Shattner’s ego and pompous attitude. But this cast has such great chemistry together, and are always complimentary of each other, never trying to ham it up or cut each other down. It was fun.

The Measure of a Man As even most of us die hard Trek fans will admit, Seasons one and two were a little shaky at best — the show really didn’t get its feet under it until the third season. But buried in the first two seasons were some gems here and there. And one real gem, The Measure of a Man stands head and shoulders above anything else in these first two seasons, and really stands way up there with the best episodes from TNG. I have not compiled a top ten list of Star Trek episodes or anything, but if I did, this would no doubt be on that list. Maybe even top five.

Screen writer Melinda M. Snodgrass submitted a script in hope that it might be accepted. As I understand it, this was actually her first, or one of her first scripts, which makes this all the more fun that it was such a good and well received episode.

But the really interesting part is that this episode is so largely dialog driven, that even the veteran show runners underestimated how many pages of script would make the 40 some minutes needed to fill the time slot. As a result, the first cut of the episode was some 12 or 13 minutes too long and had to be trimmed down.

Of course you can imagine that such a well loved gem of an episode would be in high demand for the original cut to be released. It turns out that the original cut did exist on VHS in Melinda’s personal collection. So she sent it in, and they recreated the extended cut. And ultimately, whether you have a problem with anthropomorphizing an android or not, the episode is an allegory for human rights and slavery, and it’s Trek at its best. In the fantasy of the world of Star Trek, Data is a person, he is sentient, and it’s a great character episode about whether a sentient being can be property or not.

The only thing that bothered me is that some of the music cues seemed out of place in this extended cut. It seems to me that they should have moved some of the cues, or reworked them. Since the episode is already being changed from the original, and since the original is also being recreated and will be on the Blu-ray, I don’t see that there would have been any harm from massaging the music a bit to make it work better for this extended cut.

But all in all, I was very pleased with this extended cut of the episode.

This just whets my appetite all the more for the rest of the series remastered. There are several other “gem” episodes that I can’t wait to see remastered. TNG has truly never looked this good. And it just bolsters my feelings that film is still the prefered medium. Look what they are able to do with this show that was shot on film and looked bad because of the technology of the time. It truly is amazing.