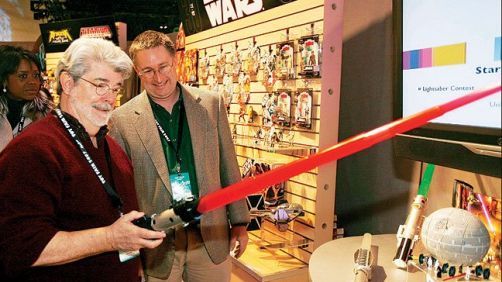 “I could see where things were headed. The toy business began to drive the [Lucasfilm] empire. It’s a shame. They make three times as much on toys as they do on films. It’s natural to make decisions that protect the toy business, but that’s not the best thing for making quality films,” former Lucasfilm insider and producer of the first two “Star Wars” films Gary Kurtz told Hero Complex in 2010. He also said “the first film and ‘Empire’ were about story and character, but I could see that  George [Lucas]  George’s priorities were changing.”

Visiting the Sundance Film Festival this week, Lucas sat down with pal Robert Redford for a conversation and the “Star Wars” creator slammed Hollywood films. They are “more and more circus without any substance behind it,” he said (via Variety). “If you go into ‘Star Wars’ and see what’s going on there, there’s a lot more substance than circus.”

And he didn’t stop there. Lucas also struck out at the very people who distributed and invested time and money into his pictures. “Studio executives generally are not the most sophisticated people in the world…you do not want to be oppressed by people who are not as smart as you are, and I’m dumb,” he said.

But Lucas isn’t entirely lacking self awareness: he conceded the source of his massive wealth: “All the money is in the action figures.”

Okay, so he “mostly” lacks self awareness. He’s “that guy” who’s always trying to be perceived as something he is not and it’s embarrassing. Really embarrassing. We need to keep in mind that this is the guy that gave us the Star Wars prequel trilogy. I am not amused or impressed.