Episode 102: And it Exploded 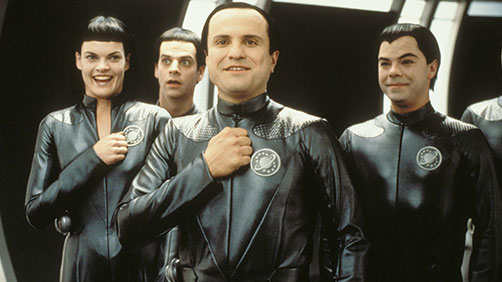 TJ, Chad, and Joe hop in the time machine and go back to 1999 to review the wonderful and zany ‘Galaxy Quest’. It may be a parody, but it’s one with heart and story, and one which all three enjoyed immensely. Highly recommended. Also up for discussion: the time has come for Chad to leave his full time co-host spot on the podcast due to other responsibilities. But don’t be sad, he’ll still be around. And in film news, Warer Bros. casts Benedict Cumberbatch as Shere Khan the tiger, Robin Williams learns about hand drawn animation, we’ll get more President Coin in the films than the ‘Hunger Games’ book series, the original theatrical cuts of the ‘Star Wars’ trilogy are not likely to be released any time soon, and Robin Williams Daughter Zelda has left social media after being harassed in the wake of her father’s death.