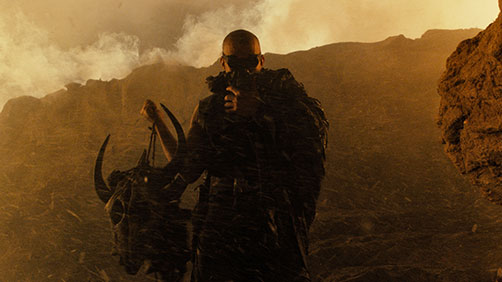 TJ and Chad discuss the newest trailers: ‘Runner Runner’, ‘Gravity’ starring Sandra Bullock, ‘Agents of SHIELD’, the new ‘Robocop’ trailer, and a cast interview for ‘Agents of SHIELD’. Plus in the news and up for discussion, Paul Greengrass says he is not making more ‘Bourne’ films, Alan Taylor is set to direct the next ‘Terminator’ film, Roland Emmerich wants to reboot the ‘Stargate’ franchise, which irritates TJ greatly, Cumberbatch is playing it coy with ‘Star Wars VII’, and speaking of ‘Star Wars VII’, there a rumored title floating around, Lea Thompson is set to appear in the new ‘Left Behind’ film reboot, and Vin Diesel wants to make more ‘Riddick’ films. And speaking of ‘Riddick’ that is the main film in review this week. Tune in to listen!