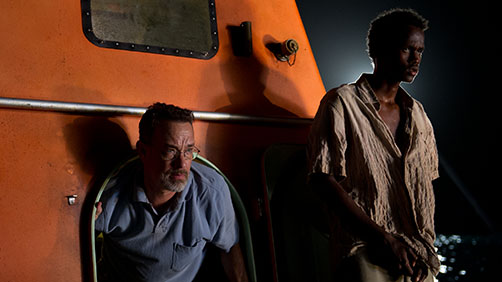 A little bit of follow up on ‘Gravity’: a reporter asked Alfonso Cuaron if filming in space was difficult… yeah, really. Turns out it was something of a joke for the comedic news outlet. Still, pretty funny because apparently Cuaron answered as if it were a real question. In other news, Hans Zimmer is talking about *not* scoring ‘Man of Steel 2’ (or Superman Vs. Batman if you prefer). TJ and Chad have differing opinions on the merits of the first ‘Man of Steel’ film’s score so that leads to some interesting conversation. Madonna was banned from the Alamo Drafthouse for texting during a film and then screamed at the other patrons when asked to stop. Bravo, Drafthouse! TJ is thinking he needs one of those in Nashville! This week’s main topic and big review focus is ‘Captain Phillips’ — another outsanding entry into this year’s cinematic run down and TJ and Chad sure think it ought to be an Oscar contender, even with the news that it may not be as entirely accurate to the real life story as we might have hoped.