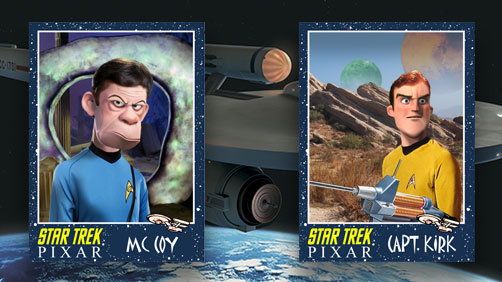 TJ takes a look back through the week with a look at Pixar, Monsters University, and what would happen if Pixar rebooted the original ‘Star Trek’, Star Wars news with rumors of a standalone Obi-Wan Kenobi film featuring Ewan McGregor, and information that John Williams would like to return to score Episode VII, plus Hamill is not yet signed for Episode VII. There’s a new featurette for Olympus has fallen and TJ is looking forward to the film. TJ will also be attending the ‘Best of Both Worlds’ Star Trek Theater event and tickets are now on sale. The fans of Back to the Future have a lot of theories as to why Marty’s parents did not recognize him from the 50s. TJ and his wife welcomed a new little girl into their family this week. TJ also reviewed the film ‘Downfall’ and though he probably won’t be seeing it again, it was a good film and worth your time. Then there’s a video on aspect ration that is highly recommended. And in stupid news this week, Michael Bay is bringing Megan Fox back to one of his sets with the upcoming Ninja Turtles film. And finally, the low down on what you might want to see this weekend. The box office offerings are pretty week this time of year, but there may be something.