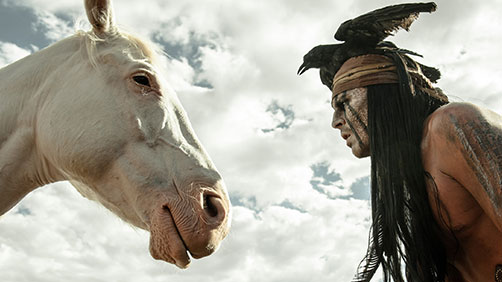 This weekend’s wrap up involves Gru stealing the box office cash box, and strange Mannequin Tonto telling a story to a little boy. Of course ‘Despicable Me 2’ took the top spot at the box office last wekend, with ‘The Lone Ranger’ flopping pretty miserably. David Chen did a comparison of ‘Superman The Movie’ and ‘Man of Steel’ scores, which was fun. Russell Crowe would be interested in a ‘Man of Steel’ prequel, and TJ thinks he “might” me as well. In the latest ‘The Wolverine’ train fight clip, TJ is a little concerned for the direction of the film, but is holding out some hope. Neill Blomkamp will not be directing the next ‘Star Trek’ film, at least according to him. CBS and Netflix are extending their licensing deal, which seems like good news for everyone. ‘Agents of SHIELD’ put out a new promo, which features some very Joss Whedon-y writing, this makes TJ happy. ‘The Jungle Book’ is headed to a new, live action production. Vin Diesel teases his involvement with ‘Avengers 2’. 3D has hit an all time low in ticket sales with ‘Despicable Me 2’. Sam Mendes is set to return for ‘Bond’ 24. Tom Hanks and Emma Thompson are set to star in the upcoming film ‘Saving Mr. Banks’ as Walt Disney and P.L. Travers respectively. Negotiations are underway for ‘Arrested Development Season 5. And of course, TJ covers what you might like to see this weekend.