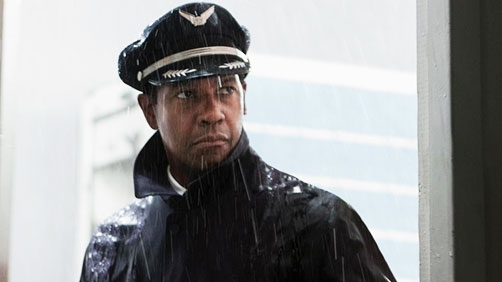 How do you describe Flight in one sentence? Easy, like this: Flight is a film about substance abuse.

Question, how do our lead characters in this film even have a liver left? There’s a lot of substance abuse in this film, and in many ways it is a somewhat compelling, if not completely satisfying drama. The drugs and alcohol are not the only adult themes in this film either. The film opens to show us just how depraved Captain Whip Whitaker is by showing him in a bedroom scene with someone named Trina (Katerina Marquez) whom we very soon discover is a flight attendant on the same flight with Whip. She’s not wearing any clothes, so we establish the type of film this is right away.

And in that very first scene, after a night of drinking and carousing, Whip and Trina snort cocaine to “sort themselves out” so they can fly. But, even though she was told not to use a needle, this is strong stuff, she does anyway and ODs which puts her in the hospital. The very same hospital Whip is going to be in shortly. Strange the way these things are orchestrated work out.

Even though Whip is completely loaded, drank through the night, jacked up on coke, and loaded up even more in flight on hard liquor disguised in his orange juice, somehow he manages to land the flight safely. In fact he does an expert job. He was the only one who could land the plane in fact. We find out that everyone put in simulators under the exact same conditions crashed and killed everyone on board.

But, even though he does an expert job and saves a lot of lives, the crash does kill six people, flight attendant (and last night’s fling) Katerina Marquez is one of them.

The rest of the film is about Whip’s substance abuse problem. Right after the crash he makes a half hearted attempt to quit, dumping all his alcohol down the drain and flushing his drugs. It’s not long before he’s drinking again. And it seems he’s really doubling down now. He drinks when he drives, he drinks when he’s home, he drinks when he’s out, he passes out on the floor of his home drunk, he can’t even stop drinking long enough to meet with anyone properly. He is truly an alcoholic.

During his hospital stay, Whip met Nicole while smoking in the hallway of the hospital. Later, he tries to visit her and finds she is being kicked out of her apartment, and the apartment owner/manager is being a little rough. Though a little bit loaded he comes to her aid and she comes to live with him.

But she is on the path to recovery and he is not. So she winds up leaving. [SPOILER ALERT!] Finally down to the wire on the NTSB investigation, he stays with a friend and sobers up for eight days so he can face the hearing, which the lawyer and he think is in the bag for them. But it turns out that an adjacent hotel room that isn’t locked is stocked with all sorts of liquor. Found drunk and completely out of it in the morning, the decision is made that cocaine will snap him out of it and get him through the hearing.

And it almost works too. But in order to make it through the hearing, the last remaining evidence that he was drunk on-flight must be laid at the feet of Trina (the flight attendant), who was killed because she was trying to help a child. Unable to bring himself to sully her name, he confesses he was drunk on the flight, and every night before and after that event because he’s an alcoholic. He confesses in fact that he is drunk right now.

Off to prison he goes and gives us a monologue, meets with his son, and the credits roll.

Did he or didn’t he?

Despite being completely loaded, he saved most of the lives on the flight. If it had been pretty much any other pilot, everyone on board would have died.

1). Do we really think if he was as loaded as he was supposed to be he would have been able to do that?

2). Why did the alcohol investigation come into play since he saved the flight?

Though a compelling drama in some ways, in other ways it just seemed like the same, tired old story. We all know what alcoholism can do to someone. And I think most of us also know that we have a particular problem with it in the United States, where we drink just to get drunk as Whip was doing. Did we need another film about it?

I also didn’t know if I was supposed to be rooting for Whip or not. He was a despicable character in many ways. Yet also in many ways he was set up as the protagonist, and in a lot of ways he was the protagonist. As I watched, I wanted him to overcome the alcohol problem. Yet given the setup, there was no way you would be happy if the story ended with him getting away with lying about how loaded he was on the flight. By the same token, as the protagonist you didn’t want him to go to prison either. I simply didn’t like this setup. I like my heroes and villains a little more clearly defined. Don’t get me wrong, I have no problem with heroes being human and making mistakes, but I don’t like it when I don’t know who to root for and how to root for them.

Similarly, I didn’t know if I was supposed to be rooting for Whip to get his family back together, or to make a successful relationship with Nicole. What was the message? It was a little muddy and unclear.

Whatever you can say about Flight the performances were great. Denzel Washington as Captain Whitaker was flawless and completely believable. I’ve seen others say this was his best performance to date, and still others say that it was close to his best. Given that he’s a good actor, this is saying something.

And then there was Kelly Reilly playing the drug addicted and recovering Nicole. I couldn’t get over how authentically Georgian she sounded, given that her native accent is of Britain. Or I should say more appropriately that I did get over it, I believed it completely. And her performance was stunning. Don Cheadle as the sharp and effective lawyer who gets it done (my clients don’t go to jail) was also outstanding.

And then there’s John Goodman. He seems prolific in films this year, and his performance here was just right.

Of course, many of you may want to wait until you can get it on DVD and clear play it. I wasn’t joking when I mentioned the adult content in the beginning. And for that, it looses points for me. I think it could have just as easily been portrayed with great effectiveness without going to the wide angle, outright nudity.