‘Lincoln’ is Quite the Glorification of Abe 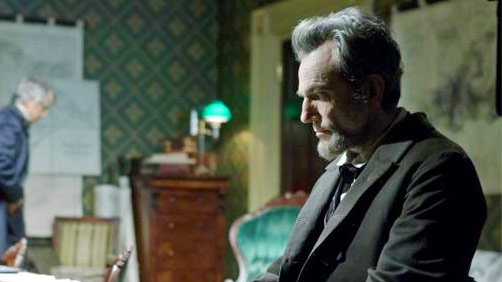 Spielberg’s War Horse of last year’s end was met with much critical acclaim. If that historical epic wasn’t enough, then Spielberg’s Lincoln looks to satisfy your every urge with a political, historical, and patriotic masterpiece. Is it a history lesson? Is it propaganda? Or is it a work of art?

Blessedly, we soon move into the main storyline, which focuses very tightly on the last few months of Lincoln’s life, as he struggled both to end the Civil War and to pass the 13th Amendment abolishing slavery. The script by Angels in America playwright Tony Kushner draws heavily (though not exclusively) on Doris Kearns Goodwin’s best-selling book Team of Rivals, which is about Lincoln’s clashes with his Cabinet over how to accomplish these two seemingly complementary, but in reality conflicting, goals. Would it be better for the Union to negotiate an end to the war first, or to use the promise of peace as leverage to get the amendment passed? Is Lincoln’s primary moral duty as a leader to end the soldiers’ suffering with all possible speed, or to ensure that the abolition of slavery is permanently written into the Constitution? The moral, legal, and political questions raised by Lincoln’s Scylla/Charybdis dilemma are the meat of the story here—and if that means most of Lincoln’s moments of high suspense occur in offices and legislative chambers, well, Kushner is writer enough, and Spielberg director enough, to turn vote-wrangling and strategic political chicanery into both wry comedy and high drama.

In anticipation of seeing Lincoln this weekend, I found Dana’s review to be a great appetizer. Read the rest of her review if you want one as masterful as Lincoln itself.