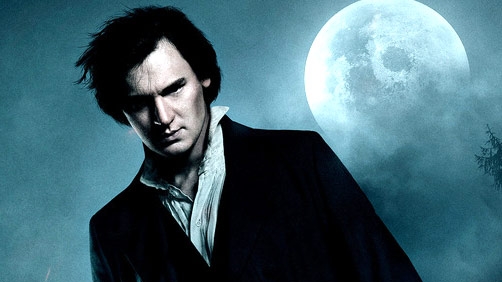 And before we go any further, I may as well make an introduction: Abraham Van Helsing, meet Abraham Lincoln. You two should get along just fine together.

It’s true. I’ve gone absolutely bonkers — missing screws, lost marbles, the whole shebang. Want to know why? Because as I watched this film, I came to a shocking conclusion: you know, this ain’t half bad. It’s actually rather enjoyable.

That’s when TJ declared me insane and had me hauled off to the nearest mental hospital.

So I’m writing to you from a padded cell. My doctors are kind and the food is fair to middling, but any talk of vampires or vampire-hunting presidents is strictly verboten. I hope in time to be restored to TJ’s good graces; for now, I have a review to finish.

Let’s get on with it, shall we?

Abraham Lincoln: Vampire Hunter isn’t a great film, nor even a very good one. But it is fun. And it is crazy (like me). And it’s not nearly as cheesy as the title might suggest. If you’ll forgive the analogy, it’s sort of like a Big Mac: not fine dining, and certainly not something to make a diet of. Every now and again, though, it just about hits the spot.

Benjamin Walker (as Abraham Lincoln) steps into the titular role and does a surprisingly good job with it, and Rufus Sewell (as Adam) proves he can play a blood-sucking monster with the best of ’em. Having said that, the real star here is director Timur Bekmambetov. His work isn’t flawless — the editing lacks polish and is frequently uneven — but his visual style is outrageously entertaining. If you’ve seen Bekmambetov’s Wanted (2006) — which, for the record, I do not recommend — you’ll know exactly what I mean. The guy knows how to stage wild, hyper-stylized freeform action sequences like nobody’s business. Not much is explored in the way of vampire lore, but it is nice to see the vamps depicted as fearsome fiends rather than angst-ridden adolescents. Remember the days? Vampirism is used throughout as a metaphor for the slave trade — a practice that is draining the life out of the United States. It is in the use of this metaphor that the movie is both strong and weak. Strong, because it shows real effort on the part of the filmmakers to give the story heart. Weak, because it doesn’t quite work. And here’s why…

Fact or Fiction… But Mostly Fiction

To which I say, Really? Is that the best you can do?

The film embraces its vampiric side while largely neglecting its history — with predictably shabby results. I don’t mind the mixing of fact and fiction, but if you’re going to do it, try to get your facts right. Otherwise it’s not a convincing mix, and any metaphors you try to use are bound to lose their punch.

Still Worth A Watch

This movie is flawed, you’ll hear no argument from me about that. What I will argue is that even with those flaws, it’s still an exciting and (for the most part) technically-impressive ride. For those of you who say, “What nonsense!” perhaps a lesson from Willy Wonka is in order: “A little nonsense now and then, is cherished by the wisest men.”

I mean, you get to see Honest Abe doing battle with the forces of darkness on top of a runaway train in the dead of night with a silver axe — what’s not to like about that?