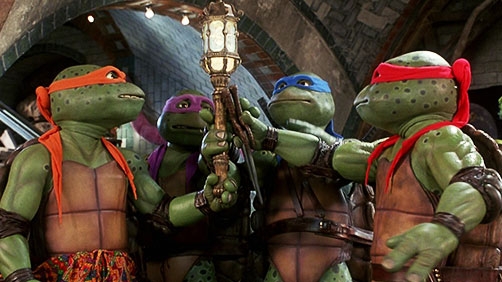 We won’t actually see the Michael Bay-produced Ninja Turtles until 2014 or so, but in the meantime Teenage Mutant Ninja Turtles co-creator Kevin Eastman is keeping the hype machine rolling by naming all sorts of other movies that Ninja Turtles will be like. Among the titles he’s previously name-checked are The Raid: Redemption, Fist of Legend, and Rise of the Planet of the Apes.

Now he’s also likening Ninja Turtles to The Avengers, in terms of “scope and roots origin.” Lord knows there’s a world of difference between emulating The Avengers and actually being as good as The Avengers, but at least they’re aiming high, I guess?

Call me a spoilsport or whatever, but this is one movie I’m not looking forward to and have no plans of seeing in the theater. Three things: 1). Michael Bay, 2). Ninja Turtles 3). Michael Bay. This is a recipe for disaster.